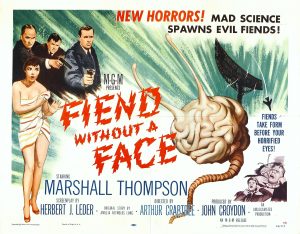 Considering that this Fiend Without A Face came about in a decade when sci-fi was generally considered grade-Z clap trap, one would assume that I’d not have anything polite to discuss in regards to this film. Well, then again, maybe you wouldn’t think that – Fiend is, after all, on Criterion, a bastion of intelligent film-making. So maybe, just maybe, Fiend Without A Face is an unjustly maligned masterpiece – a brilliant satirical look at human faults and foibles allegorized through a tale of malevolent brain-beasts.

I dare say, Fiend Without A Face falls somewhere in between. It’s not schlock, nor is it masterful. It’s a decent idea turned into a decent story (which someone had the foresight to save by not including the romantic subplot) acted by all right actors and directed with a steady hand. It’s not Ed Wood; it certainly isn’t Welles either.

There are some beautiful shots, to be sure (the establishing shots of the air-force base and some of the images of a jet’s trail are gorgeous), and solid acting. On the whole, though, Fiend Without a Face is simply a well-done sci-fi/horror amalgamation and does not necessarily deserve the full, Criterion treatment.

Yes, the idea that atomic energy’s greatest harm to mankind lies within our own psyches is interesting, but it’s not as interesting as the paranoia of conformism that drove Body Snatchers. Yes, the acting is decent, but it’s not as solid as the work done by a young Steve McQueen in the Blob. Fiend Without A Face is a movie that should not be forgotten, but it’s also a film that should not be elevated to the level of greatness (which in some ways a Criterion edition somehow does).

That said, if you have a passing interest in horror or sci-fi, or the 1950s, you will enjoy this film (it’s short, sweet, and very much to the point). Again, it’s a well-made film and deserves to be seen; it’s not, though, one of the greatest films of the science-fiction genre