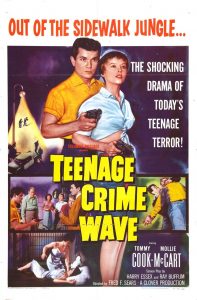 Good girl Jane (Sue England) gets mixed up with bad girl (Molly McCart) and soon both of them are headed to jail even though Jane is innocent. On the way to jail June’s boyfriend (Tommy Cook) kills the cop and takes the girls with him where they land at a farm house where they hold an elderly couple hostage. This is yet another juvenile delinquent movie from this era, which seemed to have at least ten per month. This one here comes from director Sears who’s best known for the laughable The Giant Claw and thankfully this one here features just as many laughs. Yes, if you’re expecting Citizen Kane then you’re going to be disappointed but if you want some cheap, exploitation laughs then this is a decent little time killer. The movie runs at a pretty fast pace except for the final twenty-minutes where things slow up a tad too much. I think knocking off ten-minutes of the 77-minute running time would have helped things. As for the actual film, you get girls fighting and bad guys Cook and McCart acting tough. All of this makes for some pretty good laughs but McCart actually manages to be very entertaining with her seduction/tough girl image. The scene where she tries to seduce the farmer’s son in the barn is priceless. Cook doesn’t give what I’d consider a good performance but it is campy enough to deliver some fun. The production values aren’t too bad and the supporting players do decent enough of work but in the end this film is all about nostalgia and laughs and it has plenty of both.