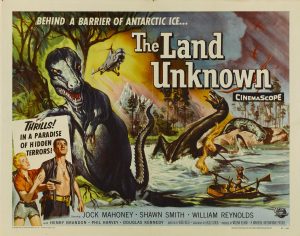 A helicopter with three Navy officers, led by Jock Mahoney, and the requisite woman reporter aboard, Shawn Smith, gets caught in bad weather over Antarctica and must land through a heavy cloud layer to find they are at the bottom of a volcanic valley. But wait a minute. This is not just ANY hot, steamy tropical jungle in Antarctica. This one is really old, inhabited by plants beasts that disappeared millions of years ago. It is also inhabited by the sole survivor of an earlier expedition, Henry Brandon. The half loco Brandon has the part necessary to repair the Navy’s damaged helo — a “push-pull rod” — but he’s hoarding his equipment because he wants to trade what they want for what he wants, namely the shapely Shawn Smith. And who can blame him? I mean, ten years? (The fact that Henry Brandon is reputed to have been gay adds a shiver of irony to the plot.) Well, everyone is attacked at one time or another by prehistoric dinosaurs but they all

survive and escape, including Brandon who has come to his senses at the last moment and discovered his humanity.

Brandon isn’t much of an actor. He’s probably best known for his role as Scar in John Ford’s “The Searchers.” (“You speak good Comanche. Someone teach you?”) But his modest talent doesn’t make him conspicuous in the context of this film. The other performers are no better. The most interesting cast member is Jock (nee Jacques) Mahoney, a stunt man raised in Iowa, and one of the best in the business. Among other memorable acts caught on film, he did the spectacular leap down the staircase onto Robert Douglas’s villain in Errol Flynn’s “The Adventures of Don Juan.” His name ranks up there with Canutt, Eason, Perry, and Dar Robinson. Not that Mahoney is muscle bound. You don’t need to be a body builder to be a stunt man. You need to be lithe, professional, competitive, intelligent, and you to be completely lacking a sympathetic nervous system. The men and women who do stunts don’t have to be good actors, as Mahoney proves here. They’re a proud

group — can I generalize like this? — but not snooty. They don’t feel they’re humbling themselves if they hang around with the extras, as I know from experience. Mahoney was a parent to Sally Field.

I don’t like going on like this about stunt people but there’s so little to say about the movie. The monsters are gaggingly cheap. The first shot we get of them is two ordinary monitor lizards, blown up to dinosaur size by photographic legerdemain, and they’re tearing each other to pieces, literally. These are big animals and here they are throwing themselves around and chewing on limbs and heads. We can see the ripped skin. Nobody can claim that no animals were harmed in making this movie. I found it a little disgusting.

The other minatory dinosaur is a T. rex — and it’s a hoot: a man dressed in a flabby plastic suit dragging a tail behind him. Another monster never lived — a kind of gigantic pumpkin with tentacles. It eats a cute little mammal. I don’t think it’s a tarsier, though Mahoney the expert calls it such. Still, they got the time and the animal reference right. At least, I think the Eocene tarsoids lived about 60 million years ago.