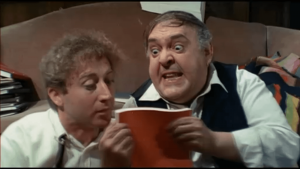 Once They Lived In Palaces,

Leo Bloom: Actors are not animals! They’re human beings!
Max Bialystock: They are? Have you ever eaten with one?
The Producers, Mel Brooks 1967

Gene Wilder passed this week, and I was surprised how much it impacted me. Like many I got my first look at Wilder’s gifts in Mel Brooks’ 1967 classic, “The Producers,” in which Wilder played the (normally) mild-mannered accountant Leo Bloom who reluctantly joins the Broadway swindle hatched by the morally elusive Max Bialystock (Zero Mostel). The same year Wilder played a minor role in Arthur Penn’s opus “Bonnie and Clyde”

There are many things of note in “The Producers” , for example the song“Springtime for Hitler”, the line” You Swedish Tease” and many more which is so resilient a movie going experience that not only has it survived a Tony-winning Broadway adaptation, it endured despite a horrible movie rendition of the play.

But the moment that stand out in the film for me is when Gene Wilder’s character, Leo Bloom realizes the depth of their he and Mostel’s fraud …. that they’ve sold 25,000% of the play to an bevy of geriatric female investors and he goes beserk…..the scene plays out with Wilder’s character breaking out in a fit. “I’m hysterical. I’m having hysterics. I’m hysterical…” Mostel throws a glass of water in his face. He responds “I’m wet. I’m wet. I’m hysterical and I’m wet.” Mostel slaps him attempting to calm him. Wilder responds “I’m in pain. And I’m wet. And I’m still hysterical.”. Funny stuff. Watching Wilder in “The Producers” is like seeing a spring powered toy that has been wound up and stuck in a box, waiting to explode.

The simplicity of the production, the power of the story and the evocative performances playing in 1967 made me reflect on the state of movie going today. I do not think we will see the likes of Wilder again. The screens on which his image danced on have become smaller and much more confined. I do not think Hollywood in it’s incarnation of today could find a place for a talent like Wilder’s.

But at one Wilder and the movies fit perfectly.

After a humble beginning in sloppy, hastily constructed nickelodeons, movies moved into theatres and became the most popular American pastime. In the golden age of movies, exhibitors tried to outdo each other in opulence, luxury and showmanship. At the time, reasonable admission prices ensured that many people could afford to go out to movies at least once a week. However how troubled or poverty stricken your own world may have been, for the price of a ticket, anyone could escape into a grand fantasy for a few hours. The theatre environment was so exceptional that it took you far away from the outside world – a mini-vacation within one elegant building – and that elevated feeling could last a while after you left. Polite patrons in these classy venues wouldn’t even think of talking during a movie, or putting their feet up on the seats – nor would they be permitted to by watchful ushers, who otherwise treated them like royalty. Double features, newsreels, cartoons, live music and stage acts, plus a large devoted theatre staff, all made the moviegoing experience addicting – and audiences came back for more.

At it’s best, a proper theatre could transport you into another world, seen in sharp detail on giant screens revealed by plush curtains. Drawing back a curtain to present a motion picture was a graceful transition from one world into another, and serious effort was taken to time curtain movement to ensure that patrons never saw a blank screen. Sound from surround speakers was heard but the speakers were rarely seen. In yesterday’s lavish movie palaces – or even some nice “modern theatres” from the fifties and sixties – moviegoing was An Event.

In the fifties, when threatened by television, movies responded by getting bigger and better. The square black and white pictures of early movies could now be seen at home on TV. Movies introduced wide screens, stereophonic sound, and star-studded epics – a bit of new technology, presented with a great deal of carefully calculated showmanship. Cinerama, Todd AO, CinemaScope, VistaVision, 3-D, seats wired to “tingle” and even Smell-O Vision, managed to lure patrons back into movie theatres, with an element of involvement they could not experience at home. Twenty years later, however, when movie theatres were confronted with cable and home video,exhibitors reacting with smaller theatres and stadium seating.

The golden age of movie showmanship was swept away in the 70s and 80s, as cable TV and videotape brought movies home. Economic minded exhibitors began subdividing theatres, then stripped away everything grand and “theatrical” about the moviegoing experience. As handsome individual theatres were replaced with groups of identical cloned bland decor boxes.

I was more than blessed to see all of Wilder’s magic unfold on a large screen in classic movie house, the smallest having 650 seats.

We all know that movie business as it is today has a serious problem. Even though the analysts spit out statistics about U.S. box office revenues are on par , given the rising prices of movie tickets, the long-term outlook is gloomy. Whether it’s video-over-the-Internet that’s headed for the television or simply the world available on a tablet, the decades-old tradition of “going to the movies,” is under fire from all fronts. And it’s showing: Movie theater attendance peaked at 1.6 billion in 2002 and only reached 1.36 billion last year, according to the Motion Picture Association of America.

The current iteration of that model is called the “tent pole”, studios are increasingly concentrating their efforts on all-out blockbusters,making fewer movies in the hopes of a big win. In 2012, for example, the six major U.S. studios released just 99 films in theaters, down from 121 in 2009. That would have been a real crap shoot 10 years ago, but seems even more of a crazy bet in a world where consumers are not only streaming movies from home, but also spending more time with high-quality television shows, like Game of Thrones or House of Cards. The rise of television as an alternative to the movies owes a great deal not only to the wonderful writing and high production values of many new television shows, but also to so-called “binge-viewing”. It’s simple a movie goers is not going to pay money to see something in the theater if they feel they’re already getting good movie going on TV on Netflix or Amazon.

The movies have given America and the world much. The flickering light on it’s screen told the immigrant that this was land full of potential and promise. It told the single mother that there was always hope. It afforded throngs of young men and women a taste of a the forbidden fruit of sex. It built hopes, explored dreams and from its crushed velvet seats grew a nation. To lose movie going as a collective experience reduces and further alienates human beings from one another. The binding of nationhood and community will weaken. A movie seen in a large auditorium will always be the preferred method of presenting a visual story. I am lucky that I have seen performers like Gene Wilder ply their magic on the giant silver screen.

Many will attend, many will remember and all will know what makes movies great. Maybe the exhibitor will grasp that big fluffy seats do not make the movies, nor having the ability to buy chicken tenders at inflated prices.

What makes the movies is that at their best we seen ourselves and our world in the movies and that we share this experience with many others at the same time ….and that makes them sacred…..and worth saving.