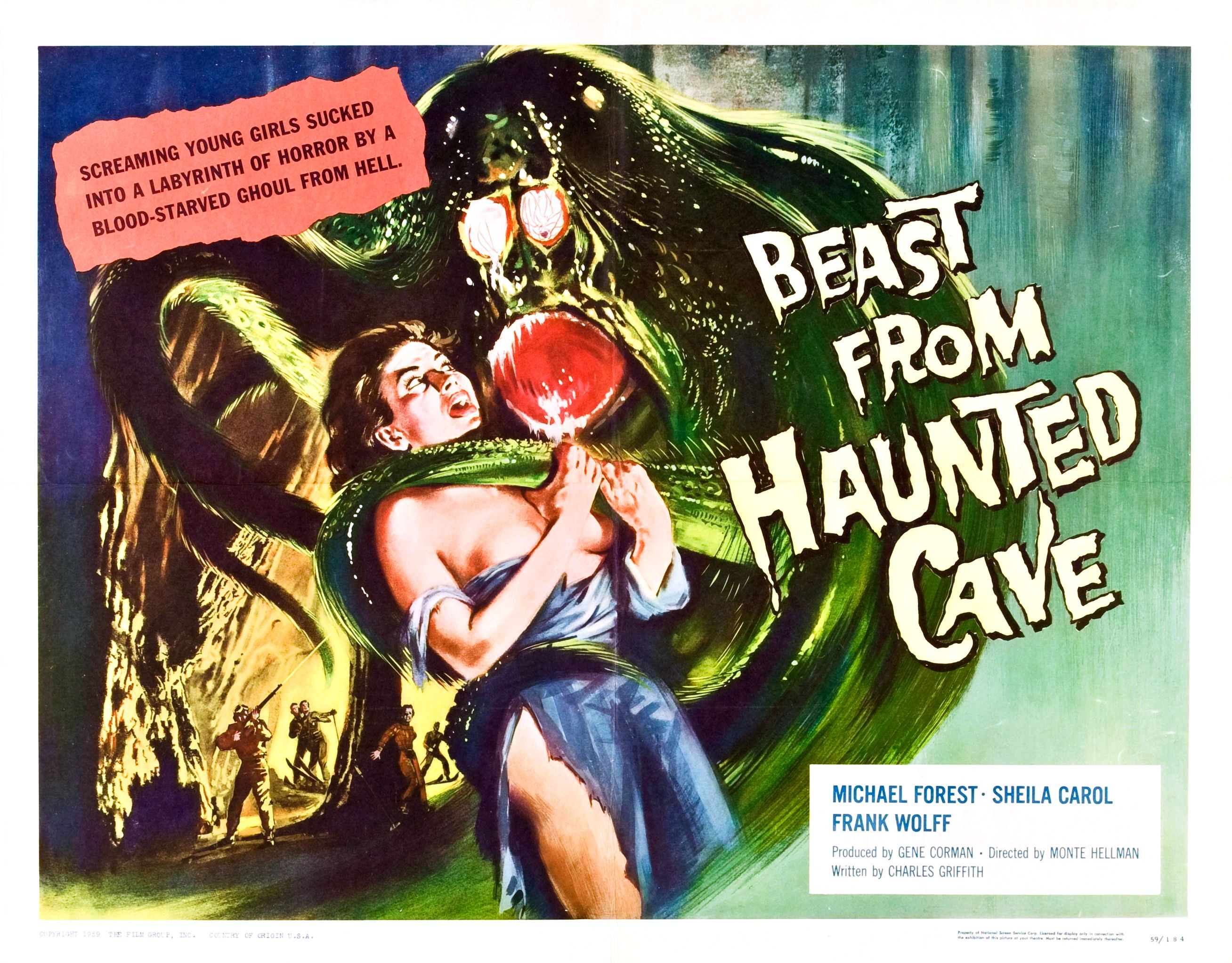 Beast from Haunted Cave is set in a ski resort & on the snowy slopes somewhere in South Dakota called ‘Happiness Lodge’ where a quartet of thieves, Alexander Ward (Frank Wolff), Gypsy Boulet (Sheila Noonan), Marty Jones (Richard Sinatra) & Byron Smith (Wally Campo), intend to rob the local bank & use an explosion in an old mine shaft as a diversion before making their getaway across country on ski’s, sounds foolproof right? Well wrong because Gil Jackson (Michael Forset) their ski instructor becomes suspicious of the quartet & when Byron plants the explosives in the mine his date Natalie (Linne Ahlstrand) is taken by a hideous spider creature thing which, as an experience, leaves him a gibbering wreck. To add to their worries as they hide out in a remote cabin owned by Gil waiting for their getaway ride the monster reappears intent on making meals out of them all…

Apparently a remake of Naked Paradise (1957) & directed by Monte Hellman Beast from Haunted Cave is a low budget Corman quickie that really doesn’t have much to recommend it by. The script by Charles B. Griffith is really slow, has lots of padding to fill the minutes out & doesn’t offer any surprises. Beast from Haunted Cave can’t quite decide what it wants to be & as such tries to mix a crime thriller with horror. A mix which, in this case, is far from successful. There are just so many instances of boring conversations, people walking around doing nothing ion particular & the monster itself barely makes an appearance until the final five or so minutes. The character’s are unlikable & there’s annoyingly named brother & sister Gil & Jill (how would they know who their parents were talking to?).

Director Hellman does nothing to add any sort of style or excitement to the dull proceedings. Only the monsters cocooned victims offer any sort of effective horror. He wisely hides the monster until the end where, when finally seen, looks like a guy with a blanket over his head & a few spider legs sticking out of him. It ain’t going to impress anyone these days although if you have a thing for actors in dumb looking monster suits then you may find something here to enjoy.

Technically Beast from Haunted Cave isn’t as bad as it could have been, silly monster apart. It’s reasonably well made, the black and white cinematography is decent enough & the locations are nice enough. The acting is generally wooden although not as bad as in some of these types of films.