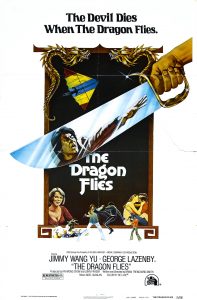 The Man From Hong Kong (1975) was one of the few attempts that film makers and producers have made in trying to market Wang Yu as an international star in the same vein as Bruce Lee. Even some film markets have began calling him “The Next Bruce Lee” despite already being an action star a few years before Bruce Lee made a Kung-Fu film. Wang Yu has a certain aura about. Unlike Bruce Lee, he’s characters have a cocky attitude with a streak of sadism. Whilst Bruce was always about doing the right thing, Wang Yu was about getting the job done and if he has to but quite a few people in the hospital so be it.

Wang Yu stars as a Hong Kong cop who has to go to Australia to capture a wanted convict (Sammo Hung). Whilst in Oz, he comes across a real shady crime lord (George Lazenby). Realizing he’s behind the actions of the convict, he sets his eyes on him and watching all of his “activites”. Not liking this unwanted pest and condescending him in public, “JImmy” gets on the Boss’ bad side. One night he decides to snoop around the Boss’ office building. Inside he finds a few dozen karate “students”. Jimmy asks them to leave but they want to take him out. A long brutal fight ensues. Despite their impressive numbers and cache of weapons, Jimmy beats they snot out of them. Re-enforcements come and after dispatching a few more guards, Jimmy is severely wound.

A van load of Samaritans give Jimmy a ride to safety. One of the woman has a father who’s a doctor. Jimmy spends the nest few days convalescing and romanticizing his heroine. But is heavenly bliss is cut short when the Big Boss’ men find him and try to whack him. After a nasty accident, Jimmy’s new lover is dead. This causes Jimmy to snap and he begins to wage a one man war on the Big Boss and whoever get’s into his way. The big boss waits for Jimmy and sends all of his available guards outside to great his arrival. A ticked off Jimmy is too much for the ill prepared henchmen. Jommy makes quick work of them and races towards the top floor. The Big Boss is tired of holding back his “awesome” fighting skills and attacks Jimmy. He’s no match for Jimmy who decides to have fun with him. Noticing the police and fire fighters outside, he goes into the Boss’ arsenal and picks up a couple of grenades. After binding the beaten boss’s hands, he shoves the grenade into his mouth and pulls the pin. The boss freaks out running around his office to and fro. Jimmy jumps out the top building before the office explodes.

A sadly overlooked film. I thought it was great. Unfortunately very few people do. George Lazenby was great as the evil boss and Wang Yu was perfect as the Hong Kong inspector. They make a perfect pair of foes. This unlikely duo also appeared in A QUEEN’S RANSOM. Watch out for Toecutter from MAD MAX and Frank Thring from MAD MAX 3. Directed by “JimmY” Wang Yu and Brian Trenchard-Smith. Fight scenes were directed by Sammo Hung. This movie also features the cheesy 70’s pop song SKY HIGH.