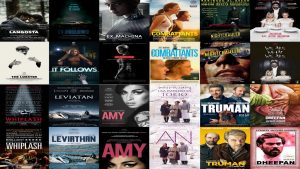 When I am not sitting at my kitchen table, pounding away at my keyboard writing about movies, I am either trying to build some kind of drive-in environment or once and awhile like I did earlier this month wade into the murky waters of making movies. I enjoy it, it is a huge amount of work contained in very little time. What of the benefits though is that it allows me a momentary perspective from the supply side of the business.

For most movies, a theatrical release continues to be the important key to its overall success. The initial release period, along with the marketing and advertising campaign that accompanies it, and the response from both critics and audiences, will often greatly influence the value of the feature on other platforms and in other territories around the world. This remains the case despite the significant contributions to revenue from other platforms such as home entertainment, as well as shorter initial release periods. The odds are that if you not have a theatrical release your movie is only going to go so far.

Keep this in mind after the blockade of VPF’s cease to be.

Now the top three major circuits control about 17,000 screens which effectively is pretty close to 50% of all the screens in America. Given the geographic distribution of the chains, they effectively have a stranglehold on American distribution. They are not the most creative lot and given that many of them are subject to the whims of Wall Street, are not loyal to the concept of movie going whatsoever. They are loyal to anything that allows them to paint a rosy picture to the stock analyst who follow them.

Because of their structure these companies, while I am sure would love to become more entrepreneurial are often stymied because of the need to constantly address the concerns of their shareholder base.

Movie theatres book movies to show on their cinema screens. They negotiate with the distributor to set the number of screens and sessions for a film and decide when to reduce sessions and to take the film off screens, considering how much revenue the film is generating compared to potential revenue from other films or content. Given the pressures from the Hollywood studios and the pressure to hold picture on screen for a certain period of time, theater owners are facing increased pressure to keep major releases on screen for longer periods of time.

Over time there has been steady growth in the number of films and alternative content titles competing for screens and audience attention. Ten years ago an average of 300 films were released into theatres each year . That number has increased by a third to an average of 398 films each year . And these numbers do not include the increasing number of alternative content screenings in movies such as ‘live’ theatre, opera and ballet.

At the same time theatres are shrinking. Many screens are converting to “luxury seating” (not the smartest idea thank you very much) and essentially reducing their viewership by 50% or more. Again, I will make the point that luxury seating takes away from the sense of community, is really trying to emulate a living room, one day moviegoers will wake up and say, they this is almost like home…..wait a minute…like him. Add food services into the equation and if you’re like me you might walk into a theatre wearing a white shirt and come out wearing a Hawaiian shirt due to colorful assortment of food stains.

The experience of movie going is an unique one. In recent surveys researchers have found has found that, for many people, ‘going to the movies’ is seen as an event, not just a way of ingesting entertainment content, movie noted the ‘movie theatre ambiance’, ‘big screen’, ‘relaxation’ and ‘socializing’ was why they went to the movies. When queried to identify the single most important reason, ‘socializing’ topped the list.

One of the key issue brought up time and again by movie goers was the fact that they did not feel that the content at movie theatres was diverse enough. They felt that Hollywood was not being risky with the stories they told and that movies were becoming a re-telling of the same story, usually based around a set of comic book inspired icons.

In the US, the share of the box office taken by the six major studios has dropped below 80 per cent only twice in the past 10 years, in 2005 and 2013. The majors have been able to maintain their domination of the box office despite releasing fewer films each year. At the same time the theatrical market has become increasingly crowded, with a steady increase in the number of films released by independent distributors competing for the same share of the box office.

This is terribly unhealthy for both the movie exhibitor and the filmmaker. The continually stratification of the market dynamic of movie going does not promote diversity nor does I provide for the expansion of the movie going audience. This lack of diversity and engagement is one of the reason we have lost 15% of Millennials during the last year. They have given up going to the movies, because they have no real interest in the stories being presented.

But there exists and opportunity to see a change. As other countries have had the pressures of the VPF be removed, an opening for independent content has occurred. In offering increased and more diverse content to their audiences local theatres have seen an increase of up to 20% of box office revenue. Often the percentage split charged by the independents is far less that the share required by the studios.

There is an opportunity to bring back the theatrical window by offering access to more independent production, to weakening the stranglehold of the studios. This is probably perceived as a risky move but numbers in other markets are showing that its a gamble that really is paying off.

I am calling for NATO, to push for encouraging it’s membership to provide access to smaller studios and distributors to screens, based on their commitment to providing a theatrical release, a 120 day window. It is time to open the doors, it is time to prepare for life after the VPF regime.

The history of Hollywood is a long and winding one. Over the course of its existence, it has been everything from a series of content factories to an accessory for giant multinational hybrid companies. It has been through numerous cycles of boom and bust. As with any institution that exists for an extensive period of time, Hollywood’s methodologies have grown and changed. Low budget genre pictures are no longer made by the dozens on a production assembly line. Directors and actors work job to job, rather than on contracts built around a set number of films. The general structure and tone of blockbusters has changed time and again….they are about to change again.