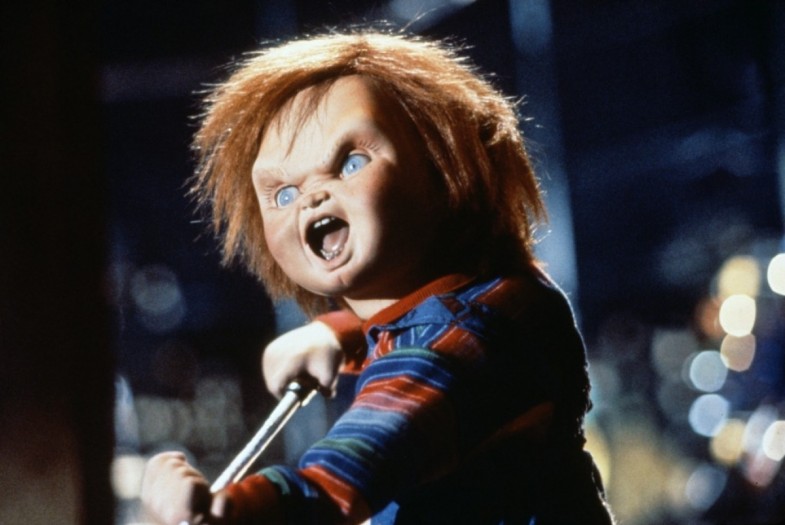 In Camel Spiders, the unapologetic B-movie throwback presented by Roger Corman, a band of soldiers and townspeople in Arizona must fight off a seemingly unstoppable species of creature unknowingly brought to the U.S. from Iraq by returning servicemen. The SyFy movie, directed by Jim Wynorski and starring C. Thomas Howell and Brian Krause, is available for purchase and rental on Blu-ray and DVD as of today.

Of course, the camel spiders featured in the film bare little resemblance the real-life critters, which have been the subject of endless rumors since the U.S. invasion of Iraq in 2003. Really, Camel spiders aren’t the size of bowling balls, can’t run thirty miles per hour, aren’t poisonous, and technically aren’t even spiders (they’re solifugae, which are, however, in the Arachnida class).

Still, the sensationalized, scary movie version of camel spiders inspired us at IAR to think about a certain type of scary movie monster. Basically, the little guys. Of course hulking killers like Jason are scary, but what about the characters and beasts who can do just as damage even though they’re about two feet tall or even smaller? With Camel Spiders in mind, we’re presenting ten examples of diminutive but nonetheless horrifying cinematic creations.

Here they are, in no particular order:

The ugliest conceivable doll may be inhabited by the hateful soul of a vicious serial killer, making him a malicious little ghoul who still capably gets his murder on, but it’s impossible not to watch the Child’s Play movies without at some point thinking, “Kick him. Just kick the little red-headed killer like you’re Ryan Gosling and he’s the elevator guy in Drive. Kick him, dammit!”

The miniaturized clone of Dr. Evil has all the incompetent malevolence of Austin Powers’ nemesis, but concentrated into a smaller, more animalistic package. As Scott Evil says, ” He’s crazy. He’s like a vicious little Chihuahua thing. He’ll kill me the first chance he gets.” Or, in the words of Dr. Evil himself, “He’s evil, he wants to take over the world, and he fits easily into most overhead storage bins.”

The most memorable moments from the first Jurassic Park involve bigness, from John Williams’ huge score to lumbering brontosauruses and a roaring T-Rex. Though the The Lost World includes a pissed-off T-Rex in San Diego, the most memorable dinosaurs in the sequel is the compsognathus. Small and birdlike enough to look harmless, both an adorable little rich girl and Peter Stormare discover that the compy’s are not be messed with.

Making two appearances on this list, all star Warwick Davis plays the title character, a leprechaun who really wants to find his pot of gold. Somehow, obtaining said gold involves terrorizing innocent people (one of whom is played by a pre-Friends Jennifer Aniston in the first film). Not only has Leprechaun taken a trip into space and two jaunts to “tha hood,” but he’s actually getting a theatrical remake, since six movies just wasn’t enough.

Like several other creatures featured here, Stitch is, in fact, really cute. He ends up being part of a loving Hawaiian family, but let’s not forget that Stitch started out as Experiment 626, a mad alien scientist’s creation designed with one motivation: to destroy the entire galaxy.

This section in the xenomorph life cycle tends to be overshadowed by the ensuing chest-bursting and the full-grown alien itself, but the Facehugger exploits some really primal fears, despite being no bigger than a housecat. It’s superfast and exists with the singular purpose of getting those awful spider-leg-fingers on your head, wrapping its tail around your neck, and dropping an ovipositor down your throat so it can lay an egg in your chest. Every single thing about the Facehugger is upsetting.

Cute when you first meet one or two of them, these creatures become really intimidating, really quickly. They’re a testament to Guillermo del Toro’s gifted monster-making; they start out childish and chattery, then their mouths open unnaturally wide, there are suddenly thousands of them, and they’re all looking to deliver a pretty cartoonishly horrific death.

A choice so obvious it couldn’t be avoided. If you ever come into possession of an adorable mogwai, you’ve got to follow the rules. Kepp him out of sunlight and never give him water. Most importantly, make absolutely sure that you never, ever, under any circumstances, feed the little fluffball after midnight. Then these mischievous little bastards will ruin Christmas for the whole town.

The next time you get an earache, try not to think about the Ceti Eels, tiny little worm-things that enter bodies through the ears. Then, as Ricardo Montalban so elegantly explains, they make themselves at home in your cerebral cortex, driving you insane and killing you as they grow.

Ewoks – Return of the Jedi

Loathed by many Star Wars fans as the furry manifestations of George Lucas’s increasing willingness to go cuddly, childish, and merchandise-friendly, the Ewoks are, in fact, a horrifyingly efficient and merciless fighting force. Think about it. With only the most primitive technology and limited preparation, these tiny guerrillas managed to mount an offensive that absolutely devastated an entire legion of the finest troops in the entire Imperial army. That’s an army that ruthlessly oppressed the galaxy for decades. If these forest-dwellers showed up in your neighborhood, you and everyone you know would be at their mercy.

Also, lead Ewok and unstoppable warrior Wicket was played by a young Warwick Davis, who also starred as The Leprechaun.