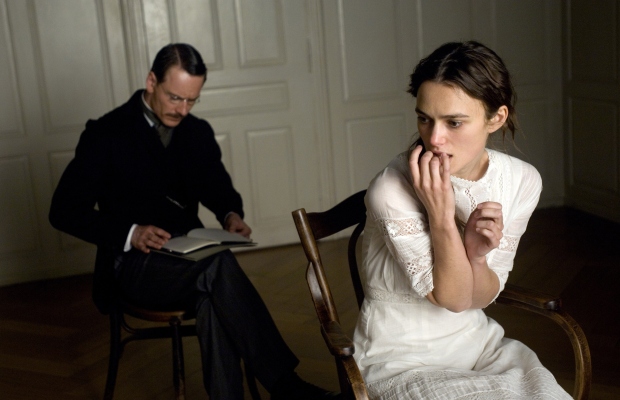 A Dangerous Method (Grade: B-): If you can get past the ear-piercing irritation of Keira Knightley trying to sound erotically possessed by carnal pleasures, then you may have a genuine chance at enjoying David Cronenberg’s latest reel that features Viggo Mortensen as Sigmund Freud and Michael Fassbender as Carl Jung. Knightley is the buzzing fly in an otherwise watchable ointment, as she plays a woman who was abused in childhood, and now craves sexual humiliation. When she makes a play for Jung, the young philosopher and nascent psychotherapist crosses the line, and becomes romantically involved with the suffering siren. Jung and Freud have some tremendously interesting scenes, and exchange endlessly pithy dialogue, but Cronenberg’s penchant for grotesque portrayals of femininity introduce an almost malicious thread to this historic needlepoint. As the relationship between Freud and Jung becomes increasingly fraught, the viewer has no place to hang her sympathies, which keeps her at arm’s length for the duration. Mortensen and Fassbender are brilliant, and make sure the movie remains interesting, even when it’s alienating. Special features include audio commentary (which includes Cronenberg defending Knightley’s performance as authentic), AFI Master Class with Cronenberg, trailer and making-of featurette.