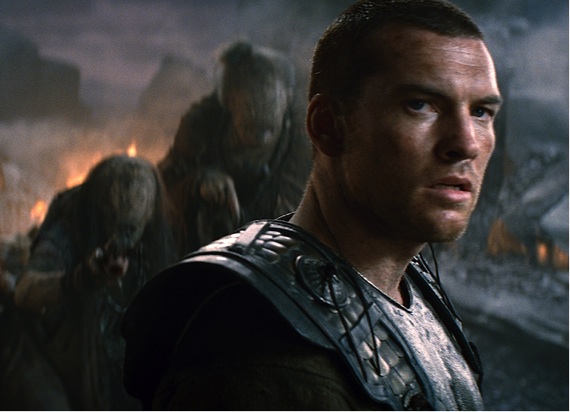 The good news is that a surly Sam Worthington tends to blurt candidly, amid F-bombs.

Like, for example, how he feels about Clash Of The Titans, the legendarily clunky remake of the Ray Harryhausen-animated B-movie. Released a few months after Avatar — in which Worthington also starred — it had 3-D FX hastily tacked on.

And such was the flavour-of-the- week hunger for anything 3-D, that Clash became a sleeper blockbuster — undeservedly so in the minds of many film fans.

“I’ve been in (the 3-D film) that’s the most revered, and the one that’s most slighted,” Worthington admits at a press conference for the sequel Wrath Of The Titans, which opens Friday. “I’ve been pretty vocal about the first one and how I did in the first one.”

So, beyond a sizable pay-cheque, Worthington needed some hard concerns addressed before he’d don the sword and sandals again as Zeus’ demigod son Perseus.

“It was, ‘How are we going to do this?’ Cause I don’t want to bear the f—in’ brunt in a situation like this when it comes to 3-D. If it’s used incorrectly, and I’ve been a part of it, it can give someone an aneurysm.”

The additional time they would take converting the movie to 3-D helped. But what Worthington says really convinced him was a script that diverged from actual Greek myths, that gave Perseus a son and beefed up the father-son relationship between Perseus and Zeus.

“Purists are probably going to f—us, but I don’t care,” he says, “because I like the fact that we are mining this world to create our own.”

So in Wrath, the sneaky Hades (Ralph Fiennes), seeks revenge on brother Zeus (Liam Neeson) by freeing their imprisoned Titan father Chronos from the depths of the Underworld. Perseus is called upon to save his father and the world, with the help of Poseidon’s son, Agenor (Toby Kebbell).

“This one carried the character rather than just being a conduit for the action,” Worthington says, again comparing Wrath to Clash.

“And I think they did by coming up with a different dynamic, basically a dysfunctional family that just happen to be gods in a world of monsters.

“If you look at the Chimera chase (a multi-animal hybrid), it’s me looking after my son, nothing to do with a f—in’ monster. The second one with the Cyclops is more of a fun chase, me going after my cousin (Agenor). And the action at the end is saving families — it’s to drill this family story in this big spectacular blockbuster.

“And if we lose sight of that, then some of the things I felt were misplaced and misdirected in the first one would come back to haunt us.”