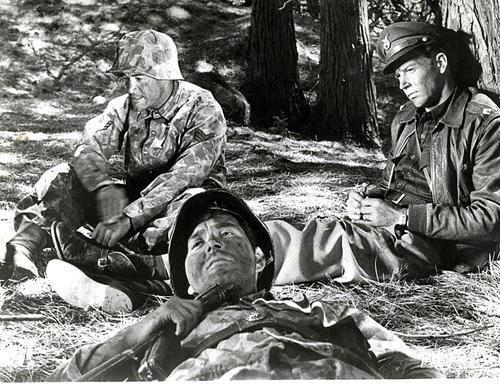 New Directors/New Films’ presentation of Fear and Desire, Stanley Kubrick’s little-seen 1953 feature directorial debut, might seem a bit like a bonus track for one of the great filmmaking careers of the second half of the 20th century. A work Kubrick dismissed as amateurish and tried to keep from public view in his later years, this slender war drama is, frankly, something of a pretentious, muddled mess. But it’s also a fascinating one—precisely for the same reason that Beach Boys completists will happily shell out major dollars for a box set of Pet Sounds marginalia. Expect Fear and Desire to be a forgotten masterpiece, and you’ll be disappointed. Treat it like a wobbly, precocious demo from a 24-year-old with mighty aspirations, filled with hints of what he would become, and you’ll be properly enthralled.

Written by Kubrick’s high school classmate Howard Sackler (who later won a Pulitzer for his play The Great White Hope), Fear and Desire drew its inspiration from The Tempest and the Korean War, though the film’s armed conflict is never specified. Actually, there’s hardly any war in Fear and Desire at all: Over the course of its 72-minute running time, this black-and-white drama mostly focuses on four soldiers, plotting their escape by building a makeshift raft to travel across a river, stuck in a lush forest behind enemy lines.

That brief plotline provides Fear and Desire with its narrative framework but doesn’t come close to describing its meditative, quietly anxious tone, which is the film’s most prominent feature. Loaded with ponderous dialogue—in its opening narration, as well as between the characters and in their internal monologues—Fear and Desire is a movie that’s entirely about what it’s “about”: the madness, inhumanity, and hypocrisy of war. There isn’t a single theme here that Kubrick won’t explore in more indelible, confident terms in his later antiwar films. (Even Fear’s dangerously unsettling dweeb, Private Sidney, played by future filmmaker Paul Mazursky, seems in retrospect to be a rough-draft take on Vincent D’Onofrio’s menacingly tortured Private Pyle from Full Metal Jacket.)

Although its indifferent performances and inelegant editing underline why Kubrick wanted Fear and Desire buried, what comes through strongest is what a master he already was with lighting and composition. By the time Kubrick made Fear and Desire, he had been a professional photographer for several years, so even if his feature debut confirms that he wasn’t a natural-born storyteller—the movie favors clunky Big Ideas over compelling narrative momentum—it’s clear that he knew where to stick a camera and how to give each image the optimum amount of shadowy foreboding. The mental unraveling of Kubrick’s soldiers often comes across as theater-school melodrama, but the way he frames them amid the forest’s silent emptiness produces its own sort of existential terror. (And at this early stage, Kubrick was already adept at dramatizing the impact of violence.)

Fear and Desire’s wonder is not so much about seeing what’s there on the screen but rather in considering how quickly Kubrick developed as an artist. For the young filmmakers whose work is being shown at ND/NF, this mediocre curio might serve as encouragement that even an auteur like Stanley Kubrick had to start somewhere. Or discouragement: Kubrick’s first masterpiece, Paths of Glory, arrived just four years later.