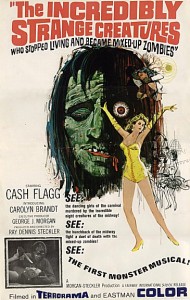 My dear, departed friend, cult movie god RAY DENNIS STECKLER was a frequent guest at my live Thrillville show. One of the highlights of my so-called career, and life, was chasing Ray (in his trademark screen alias “Cash Flagg” hood) around the theater, wearing one his original mummy costumes and carrying a plastic axe. Predictably, one night when the house was packed, the fragile print broke in the middle and Ray had to improvise on stage until it was repaired. He was used to pimping his product directly to his audiences. 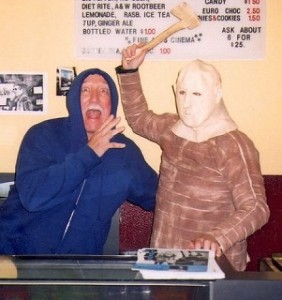 THE INCREDIBLY STRANGE CREATURES WHO STOPPED LIVING AND BECAME MIXED=UP ZOMBIES (1963, AKA Teenage Psycho Meets Bloody Mary) is Ray’s masterpiece, though he made several other classic cult favorites including The Thrill Killers (1964), Rat Pfink a Boo Boo (1966), and The Lemon Grove Kids Meet the Monsters (1965, inspired by his childhood idols, The Bowery Boys.) The long-winded title actually elicited a law suit from Columbia Pictures, which was in simultaneous production with something called Dr Strangelove: Or How I Learned to Stop Worrying and Love the Bomb.  (Ray had to tinker with the original title a bit.) It was billed as “the first monster musical” and seems to me that it inspired every independent visionary filmmaker exploring similar psychotronic turf from John Waters to David Lynch. The film is beautifully shot in a hallucinatory style (in fact hypnosis plays a big role in the pulpy proceedings). Two of the cameramen, Laszlo Kovacs and Vilmos Zsigmond, went on to bigger (if not better) things. You don’t actually see the “zombies” until the feverish finale, but it’s worth the wait. Go-go showgirls (one portrayed by his wife at the time, lovely Carolyn Brandt), surreal nightmare sequences, hooded killers, carnival gypsies, mutant murderers, musical numbers, bad comics, coo coo hairstyles, cool cars – this one has it all. Here’s to you, Ray. Cheers.  Available on DVD. 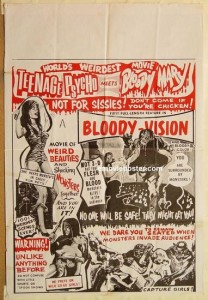