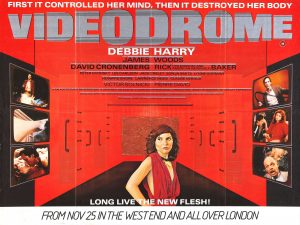 It takes the slightest peeks at his career to figure out David Cronenberg (“The Fly,” “Dead Ringers,” “Naked Lunch,” “The Dead Zone,” the upcoming “A History of Violence”) is a director who is not to be toyed with. I forgot to add in his 1983 horror movie “Videodrome,” and there is a reason for that, which I’ll talk about later. His works provoke intelligent thought, and terrify those who can’t comprehend it. His films stimulate, offend, and move those who care to watch them with an open mind.

Allow me to (try) explain. I won’t bother to go into detail about the plot. A sleazy, lowlife TV producer named Max Renn (James Woods) rapidly becomes obsessed with an unusual television signal, which in turn begins to warp his perceptions of reality. Get it? Nah, of course you don’t. You’re not going to let a one-sentence plot description and, if you own the Criterion Collection DVD, the three essays included deter you from watching it, are you?

I won’t even try to pretend I understood what was going through Cronenberg’s mind when he wrote and directed this picture. I also won’t pretend I understood the essays included with the DVD (and I don’t think the writers did either). It’s warped, it’s perverted, it’s depraved, and it’s insanely intriguing and fascinating. The masses are frightened by “Videodrome” and with good reason. “Videodrome” is Cronenberg’s dastardly take on mass-media consumption during a time when television was afraid… afraid to be real. Media violence had not yet become a major issue in America and hypocritical politicians weren’t condemning it. But keep in mind this film was made in ’83, years before the mind-blowing reality-morphing of “The Matrix” (1999).

There’s a little more that I think I can get away with in describing the plot, and Renn eventually traces the signal to Pittsburgh, and is introduced to the station’s enigmatic programmer Brian O’Blivion (Jack Creley) and his daughter Bianca (Sonja Smits). He learns of the bizarre nature surrounding Videodrome, and the fate of those of who watch it. As he becomes more and more obsessed, he finds it nearly impossible to turn it off, or turn away. Then those mutations and hallucinations Cronenberg is famous for start happening and when that does, things become nasty and the queasy may want to keep a finger on the fast-forward button. It’s no secret Cronenberg loves torturing his protagonists and here, the “new flesh” wants to live long and Woods has the nice warm body perfect for it – he becomes a literal media assassin with a vaginal slit in his stomach that doubles as a programmable VCR and also has a handgun fused to his wrist – he’s a virtual slave to Videodrome.

Lastly, the eerie, driving score by Howard Shore swells up during the film’s most intense and surreal moments, the most lovely being Woods’s lovemaking with his television. I always watch Cronenberg films at least partially for Shore’s music. Now I know why Cronenberg selects him for his soundtracks.

“Videodrome,” I think, has a lot more relevance today than it did 22 years ago. It’s more visceral than gross, is quite brilliant, and doesn’t spare us graphic violence and gore. It’s alive, it’s “Videodrome.”