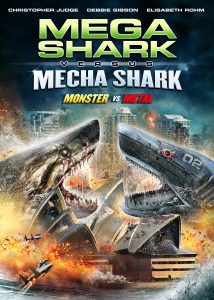 When a massive Megalodon shark is released into the ocean’s waters, a Navy team is forced to utilize a monstrous shark-shaped submarine to combat the deadly creature before it’s wake of destruction covers the entire planet.

This is a massively entertaining and enjoyable effort that really has a lot going for it. One of the best aspects here is the generous helping of cheesy action spread throughout, since the massive shark is unleashed quite early on in the film which manages to get the new submarine into action as well which is quite an entertaining feat considering the amount of time the two spend battling each other is so high that they take an additional connotation that doesn’t touch the past instances in the series by finally putting a worthwhile opponent into battle in an environment with the gigantic creature. The submarine being the same size makes for a truly worthwhile battle of the titans between the two and it happens frequently throughout the film, as the attack on the aircraft carrier, the assault on the carrier fleet and the later battle at the oil rig all allow for some really engaging battles between the two behemoths in an enjoyable cheesy manner, and by being spread throughout the film as a whole makes for quite a lot of fun that helps out in the latter part of the film. Having a full-scale city destruction sequence in the middle of the battle between the two accounts for even more exciting action to take place and the film is grossly overwhelming seeing the giant robot wade through the city leaving as much destruction as it does. Not to be outdone in that regard, it’s certainly got the best rip on the airliner-out-of-the-sky routine here with an enjoyable cheesy take on the classic scene in the franchise which is a lot of fun. Again, though, the fact that the CGI featured here looks so bad as it does is something to get over when the robot never really gives off the metallic vibe beyond the overall design featured all sorts of different gears and lenses which reveal its’ true nature even though the shark itself is easily the best-rendered of the series despite the frequent and annoying size fluctuations which have always plagued the franchise. Still, the only other true flaw on display is the finale, which has a lot of mention towards the sharks’ spawning and breeding instinct but is overshadowed to make way for the city destruction sequences that contain all the action but undercuts the story since such a big deal was made about it throughout the last act of the film. Otherwise, this is a lot of fun overall.