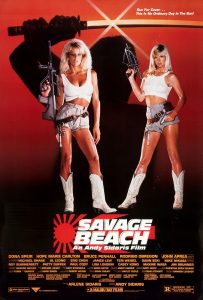 “Savage Beach” has the most unusual story of the Lethal Ladies series. Instead of an over-equipped investigation with a plan, this is more like an accidental adventure. No Las Vegas night clubs or expensive sports-cars – “Savage Beach” plays on a lonely island where a gold treasure was lost in WW II, yet still guarded by an isolated Japanese soldier. Not a new story (I remember “Who Finds a Friend Finds a Treasure”, 1981), but with Sidaris’ attention grabbing techniques (from explosions to boobs) it works great. Our heroines, the two pilots Donna (Dona Speir) and Taryn (H.M. Carlton), make an emergency landing on that island after a storm (another rarity: bad weather in a Sidaris movie). More and more sinister characters arrive to make the island unsafe. Al Leong (who later played the helicopter pilot in “Hard Hunted”) gets a good role as a tough bad guy. A situation that stuck to my mind is when the Leatherface samurai frees Taryn and explains later: “I can’t kill those eyes again” – what a moment of poetry, folks! Oh, and would you believe a bloke who calls Donna “bimbo” survives the next few seconds? This is the 4th out of 12 Sidaris movies I reviewed (in chronological order), and one should note that after 3 successful pictures which he had financed basically from his personal money, Sidaris was offered a deal about 5 more which kept the Lethal Ladies series going. “Savage Beach” surely was an impressive start for this new… uh… pentalogy!