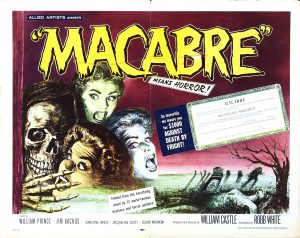 A doctor in a small town has done a good job of making himself hated because of his role in the deaths of two sisters. When his daughter disappears and a caller announces that she has been buried alive, will the unpopular doctor uncover the MACABRE scheme, or will the cute little girl die a horrible, frightening death?

But, a movie with the amount of bad, bad acting this one does, indicates a director perhaps more concerned with the promotion of his movie than the making of it. The logical flaws of the film are really extraordinary, beginning with small things, such as the distance between the small town and its old creepy graveyard, and advancing to the large, such as our hero’s steadfast refusal to call the cops. And the final resolution, alas, is more disappointing than surprising. The best thing that can be said about the “promotional” aspects of the film — mostly a rather campy opening announcement about how really truly scary all this is going to be, and a Charles Adams – like animated closing credit sequence, is that these campy things really don’t get in the way.

Worth seeing, because the Jim Backus performance is the sort a revelation that can happen when a good character actor is totally cast against type. But the world won’t come to an end if you miss this.