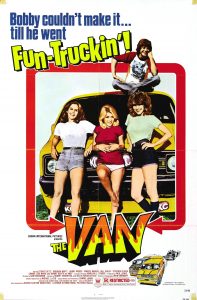 The cult of personality has elevated the status of Roger Corman, Sam Arkoff, Lloyd Kaufman etc. as kings of the B’s. Because the folks at Crown International were so key, they haven’t been elevated to the status they richly deserve. A film like THE VAN may now seem like a disposable piece of Drive-in esoteria, but it was a sizable hit when it was released (not to mention subsequent re-releases as a double feature with other Crown hits).

THE VAN was a perfect example of Crown’s hit strategy of seizing upon the mood of movie-goers at the time of a film’s release. Here, it was sex, drugs, rock ‘n roll and the brief “Custom Van” fad. As others have noted, it is ironic that the “hit” song in the film refers to a Chevy when the title vehicle is a Dodge in the film itself. I had a town Selectman where I was at the time even declare these vans to be “dens of sin on wheels!” A perfect ad line for the film!

There are the usual assortment of “good” and “bad” girls, muscle-heads and low-brow hijinks (including a supporting bit by Danny DeVito). In many ways this isn’t much different from the old Beach Party movies of the 60’s, but now spiced up with Nudity and Drug use. Obviously done on a limited budget and a limited schedule, the film coasts along pleasantly enough with a breezy charm that compensates for some, by today’s standards certainly, un-PC views of women.

The classic touch is a Toaster for Bobby’s den of sin on wheels. Yes, a Toaster! Hey, you gotta have something hot for those munchies!