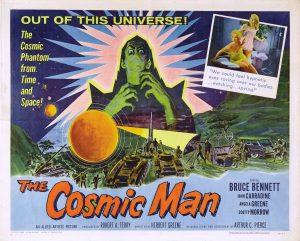 “The Cosmic Man” is about an alien craft that arrives on Earth. While the humans involved argue over how to deal with the situation, the Cosmic Man himself (John Carradine) materializes. But it’s not certain just what his presence means; the Cosmic Man is interested more in observing human behaviour.

This little film may test the patience of some viewers because it’s much more dialogue driven than action driven. There’s a lot of information to digest here, but the script by Arthur C. Pierce is intelligent, and touches upon still common ideas. For example, the conflict between a scientists’ methods and the military way of thinking. Our hero scientist, Karl Sorenson (Bruce Bennett), is regarded as being somewhat dubious by people such as jut jawed Colonel Matthews (Paul Langton).

Director Herbert S. Greene goes for a rather sedate pace, but he creates some undeniable suspense and creepiness. Before the Cosmic Man appears in the form of Carradine, he’s very wraith like. (The special effects are actually pretty decent.) One might also wish that Carradine had more to do, as he doesn’t turn up on camera until well into the film. But it’s a treat to hear him spouting exposition in that unmistakable voice of his.

The rest of the cast is solid. Bennett is a likable co-lead, and Angela Greene is similarly engaging as the love interest, Kathy Grant. Scotty Morrow is very appealing as Kathy’s disabled son.

One does see examples of the kind of unfortunate thinking which The Cosmic Man criticizes. This would make an interesting B feature to play along with “The Day the Earth Stood Still” (1951).