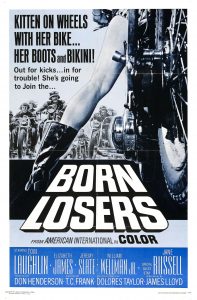 Given its low budget, this is not a bad movie. A motorcycle gang, led by the scruffy Jeremy Slate, terrorizes a small California town, and in the process rapes several college girls. There’s lots of tough talk, motorcycle noise, and violence, as you would expect for a biker film.

Of course, to balance out all the villainous mayhem, you gotta have a hero on the scene. And for the era in which the film was made, there was no better hero than the charismatic loner, half-breed Billy Jack, played with serene gusto by Tom Laughlin. He’s a one-man show of moral and physical strength, as he outwits and outfights the biker roughnecks. The film makes the point that bad parenting and ineptness in traditional law enforcement foster an environment conducive to delinquency.

Interestingly, although this is the first Billy Jack film, Laughlin played a similar role ten years earlier, in a movie called “The Delinquents” (1957). His character was Scotty, a good guy teenager who gets mixed up with a bunch of high school hoodlums. Whereas in “The Delinquents” all the villains are kids who drive around in jalopies, in “The Born Losers”, the kids have grown into adults who ride motorcycles.

In “The Born Losers” the characters tend to be stereotypes. In a time period that immediately preceded the women’s lib movement, the film’s female characters are very, very subservient. The film’s plot does depend on contrivances to some extent. Dialogue lacks subtext. Production design is … colorful. And the costumes reek of late 60’s garish “hip” (love those pink walls and pink clothes), all perfectly in sync with the Age of Aquarius. Tom Laughlin’s direction is excellent. Color cinematography is very good. The outdoor scenery is wonderful, as is the music in the opening title sequence.

I’ve seen a number of biker films. “The Born Losers” is one of the best. It was highly successful at the box office, and led to later Billy Jack films. It has a cinematic style that is almost iconoclastic; not insignificantly, it preceded “Easy Rider” by a couple of years. Such was the impact of “The Born Losers”.