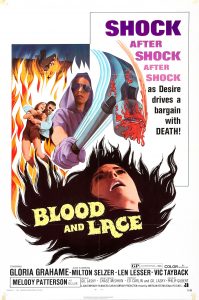 After her whore of a mother is murdered by a hammer-wielding nutjob, teen Ellie Masters is sent to live at the rural Deere Orphanage. She immediately begins plotting her getaway, as she wishes to track down the father she never knew. What she doesn’t realize is that Mrs. Deere and her handyman, Tom Kredge, won’t let anyone leave under any circumstances. If it comes down to murder, so be it. As she deals with this sadistic twosome, Ellie also realizes that she’s being stalked by a masked creep with a claw hammer.

Often referred to as the sickest PG film ever, I had wanted to see this for years. After finally happening upon a VHS copy, I was disappointed when I quickly came to the realization that it was a cut print. The opening hammer murder wasn’t as explicit as I’d heard, and the scene where Bunch seduces Walter in the barn was really chopped up. Thankfully, not only does the print on Netflix look incredible, but it’s also fully intact. This is such a great, truly warped little nasty. The twists just keep on coming, getting sicker and more twisted as the film progresses. The ending is a real kick in the balls.

Gloria Grahame and Len Lesser own the film as the pair of crazies who will get those welfare checks at any cost. Melody Patterson is an arrogant bitch as Ellie, so I never felt much sympathy for her. Vic Tayback is the perverted detective who takes more than a passing interest in Ellie’s predicament. His character made my skin crawl.

“Blood and Lace” is pure, untarnished nihilism on film. There’s nary a sympathetic character in sight as the sleaze and melodrama run rampant. One also has to wonder if Wes Craven was inspired by this film’s masked freak when he came up with the look of Freddy Krueger. The only thing I don’t care for here is the music. It’s overwrought in several places where something more subdued would have added to the overall effect. This is a gem that deserves a stronger reputation.