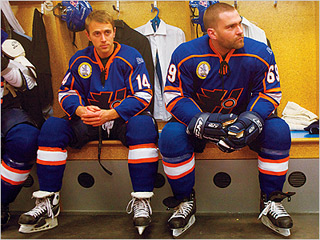 Seann William Scott has spent his career projecting a certain goofy dumb puppy-dog sweetness. That persona has become a bit of a trap for him, and Goon, an ice-hockey movie that’s all about the pain, points to a way out. This time, Scott plays a big dumb sweet puppy…who bashes people’s heads in. And he makes the contradiction work. Scott’s Doug “The Thug” Glatt is a nice Jewish boy who’s the prodigal son in a family of brainiacs. He toils as a bar bouncer, and he’s a natural at it — a wrecking-ball bruiser who can break your fist just by placing his skull in front of it. But he’s not exactly going places, and the failure shows on his sad, sincere features. When he’s recruited by the Halifax Highlanders of Nova Scotia to be their “enforcer” (the guy whose job is to throttle opposing players), he jumps at the chance. He can barely skate, but it hardly matters: As a goon, he’s a genius.

Bulked up, bearded, his face a bit more rounded with flesh, Scott makes Doug a cross between Lennie in Of Mice and Men and a Rocky Balboa who never outgrew being a musclehead for loan sharks. Jay Baruchel, who co-wrote the script (with Evan Goldberg, the co-writer of Superbad), plays Doug’s best friend, a nattering noodge who can’t not talk in manic homoerotic metaphors. I wish that Goon were more than a sports-comedy blueprint outfitted with some pretty funny lines. It’s a very slight movie, with the standard elements — rise to success, love story, competition with rival bruiser — all served up like side dishes on a plate. Still, Scott gives this teddy-bear lug a consciousness, especially as Doug faces down a veteran hockey enforcer (nicely played by a handlebar-mustached Liev Schreiber) and the two beat the crap out of each other. When Seann William Scott uses his fists, he’s a star.