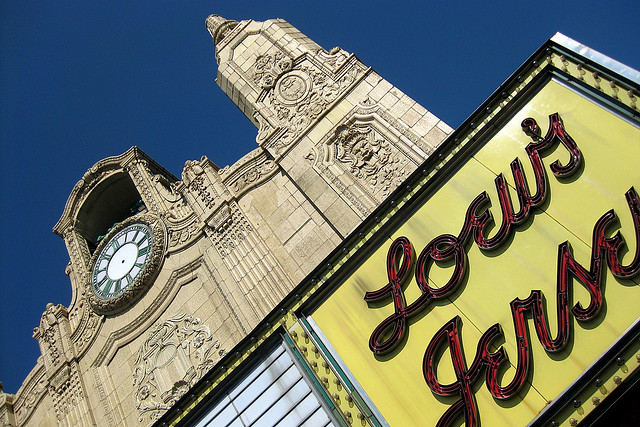 1925 Marcus Loew visited Ohio for two days. During this time he and W. A. Finney, northeastern Ohio Manager for Loew’s Theatres Incorporated strolled down South Main Street. Loew looked at the site where the partially built Hippodrome Theatre was located. The Hippodrome was begun in 1918 but was never completed. Loew choose this site as the location for the Loew’s Theatre of Akron.

Who was Marcus Loew?

Marcus Loew was born on May 8, 1870, to a Jewish restaurant waiter from Austria, Herman Loew, and his German wife, Ida Sichel, on the lower East side of New York City. Marcus, nicknamed Max, attended grammar school until he was nine years old. His early jobs included selling newspapers, working in a map making plant, hand printing throwaway sheets, clerking in a gentlemen’s clothing store, and laboring in a fur-making factory. While still working in the fur business, Loew married Caroline Rosenheim on March 4, 1894.

Five years later Loew and as actor friend, David Warfield, decided to go into the real estate business. Loew continued his job as an employee in fur-manufacturing, an occupation that eventually took him on trips West, where he met two Chicago fur merchants, Adolph Zukor and Morris Kohn. These two men later went to New York and joined Mitchell Mark in setting up penny arcades, commonly called “electric vaudeville” or “open-front parlors with machines”. This venture became the Automatic Vaudeville Company on 14th Street in 1903. Loew and Warfield became partners in the company when it expanded to Boston, Massachusetts; Philadelphia, Pennsylvania; and Newark, New Jersey. This involvement in the penny arcades was the beginning of Marcus Loew’s long tenure in the theatre business. In 1905, Loew opened his own arcade on New York’s 23rd Street, after Warfield and he formed their own company called the People’s Vaudeville Company.

Marcus Loew’s theatre endeavors soon included a chain of arcades in New York and the Penny Hippodrome in Cincinnati, Ohio. The latter became a nickelodeon when the idea of showing a film for a nickel proved popular. With the success of the Cincinnati Theatre, Loew went to New York to convert his 23rd Street Arcade into a nickelodeon. He also began purchasing theatres, converting them into vaudeville-film combinations.

By 1919, Loew was so immersed in the theatre-buying business that his company, People’s Vaudeville, became Loew’s Consolidated Enterprises, then Loew’s Theatrical Enterprises, and finally Lowe’s Incorporated. The new corporation’s most important transaction came with the purchase of the Metro Goldwyn film-making company. In order to elimiate film rental costs, Loew had the concept of producing films for use in his own theatres. He chose Louis B. Mayer as vice president and general manager of the movie company, thus the name Metro-Goldwyn-Mayer became the official title of the studio.

The idea of combining vaudeville with films proved so lucrative that on August 29, 1921, the Loew’s State Theatre at Broadway and 45th Street in New York opened with a seating capacity of three thousand, two hundred. Adjacent to this large vaudeville-picture palace in Times Square stood a sixteen-story building that became the home of Loew’s Incorporated.

In 1924, Loew had one hundred theatres; by 1927, one hundred and forty-four. Some of the theatres added in the 1920’s included six houses in Cleveland, Ohio: three in New Orleans, Louisana; three in Baltimore, Maryland; three in Pittsburgh, Pennsylvania; two in Toronto, Canada; and one each in Syracuse and Buffalo, New York; New Haven and New London, Connecticut; Chicago, Illinois; Kalamazoo, Flint, and Saginaw, Michigan; Evansville, Indiana; London, Ontario, Canada; and Akron, Ohio.

Of the theatres Loew built, the majority of them, some one hundred and twenty- five, were “deluxe, super-modern houses of the first grade.” He was in the process of building twenty-four new ones when he died at the age of fifty-seven on September 28, 1927.