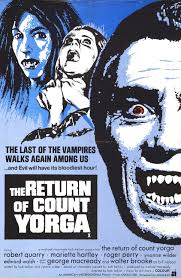 Count Yorga (Robert Quarry) is living in a small town outside of San Francisco, where he becomes involved with an Orphanage, primarily as a source of victims. A tragic event leads persons from the orphanage to contact the local police, and together, they end up investigating Count Yorga.

Ostensibly a sequel to Count Yorga, Vampire (1970), this film really plays more like a re-imagining, similar to the relationship between Evil Dead (1981) and Evil Dead II (1987). Because of this, it doesn’t really matter which film you see first. This also explains why there is no explanation given of Count Yorga’s sudden appearance in the San Francisco area. The first film didn’t necessarily happen in this film’s world. This is more another version of the same story, told in an “alternate universe”.

And at that, I liked it just as well. This film is also a 10 out of 10 for me. The extensive hand-held cinematography of the first film, which gave it a Texas Chainsaw Massacre (1974)-like feel, is gone for the most part, but cinematography that is just as interesting has taken its place. This time around, we get very strong contrasts, from near black night scenes–but wherein we can still see the action, to very bright, strong contrast shots of the orphanage during the day. Bright greens often show up in the night shots, as well.

But the film wouldn’t receive a 10 just for cinematography. The story works well, and although less dialogue-intensive than the first film, the dialogue is just as intriguing here. A lot of it, like the first film, is carried by Roger Perry, who is present in both films as a doctor, although a different character in each, lending further evidence to this being more of a re-imagining than a sequel.

Whereas the vampires of the first film were more sensual, partially due to the fact that early conceptions of Count Yorga, Vampire had it as a sexploitation vampire film, the vampires here are more a combination of Night Of The Living Dead (1968)-like zombies and vampires. At that, they’re still somewhat sensual, but a more literal idea of vampires as a kind of living dead is invoked beautifully here. It’s too bad the idea has been so little used in later films.

Also like the first film, The Return of Count Yorga knows that it is somewhat absurd, and although this one is more conspicuously humorous, that aspect is not dominant. Writer/director Bob Kelljan doesn’t forget to focus on creepiness and the disturbing, which are liberally present. In fact, this film contains one of my favorite “massacre” scenes. It is the centerpiece of at least the first half of the film, and propels the plot.

Quarry is one of my favorite “Draculas”, and the creepiest “Renfield” makes a return here, too, in the guise of Brudah (Edward Walsh). The new home is as good if not better than the home in the first Count Yorga, Vampire, and the climax may be better here as well.