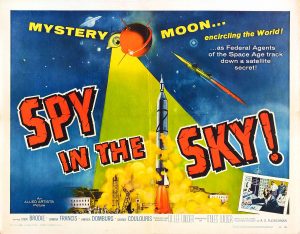 1958’s “Spy in the Sky!” was clearly inspired by the launching of Sputnik, but was beaten to the screen by Roger Corman’s “War of the Satellites.” A little seen and rather ordinary spy thriller with no sci fi elements, starring American import Steve Brodie, who must contend with multiple bad guys (led by George Coulouris) in tracking down a German scientist who knows all the Spunik secrets. Director W. Lee Wilder, younger brother of Billy Wilder, had by now relocated to England, winding down his undistinguished career with scripts cranked out by his son Myles, who wrote both “Spy in the Sky!” and “Bluebeards Ten Honeymoons.” Bill ‘Chilly Billy’ Cardille’s Chiller Theater remained a Pittsburgh staple for 20 years, and this feature was among the titles that aired during its first season, paired with Roger Corman’s “Atlas” -March 15 1964 (not surprisingly, neither film ever appeared again).