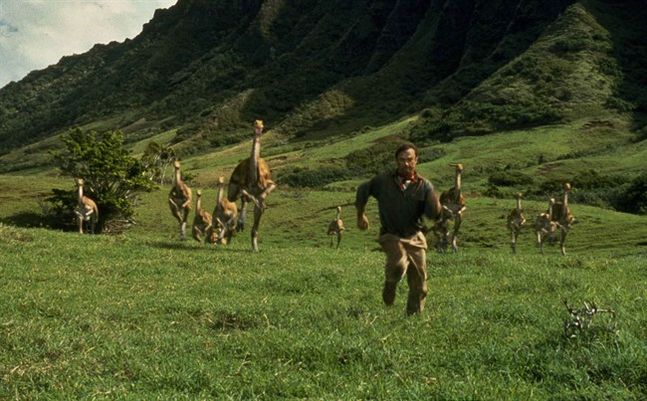 There’s a time warp taking place at the multiplex, where past hits have been creeping back onto the big screen in an apparent bid to cash in on audience nostalgia and the 3D craze.

James Cameron’s 3D reworking of “Titanic” is just the latest example, but Cameron’s hi-tech revisit comes on the heels of George Lucas’s 3D revamp of the “Star Wars” franchise, ahead of plans to put Steven Spielberg’s “Jurassic Park” in eye-popping 3D and follows the recent 3D reboots of animated classics “The Lion King” and “Beauty and the Beast.”

Of course, the look back is much more than just a trip down memory lane — by most accounts it’s all part of Hollywood’s attempts to steer audiences towards the promise of 3D, where a movie can be an “event” and ticket prices can command hefty markups, says Jesse Wente, programming chief at Toronto’s preeminent arthouse theatre, TIFF Bell Lightbox.

“For movie marketing people, the idea of selling something people are already familiar with is a pretty old axiom,” Wente says of the flood of classic releases.

“It’s why trailers are the way trailers are and why people reference other movies when talking about a new movie…. That’s how you sort of sell people on a new idea.”

The new idea here is actually an old one, but techno-geeks like Cameron, Lucas and Spielberg are eager to put as much distance as possible between their slick 3D experiments and any earlier incarnations.

That includes recent critical bombs “Clash of the Titans” and “Pirates of the Caribbean: On Stranger Tides,” which each offered up disappointing takes on 3D after Cameron raised the stakes with his visually astounding “Avatar.”

“Clash of the Titans” was shot in 2D but rendered stereoscopic in post-production, giving rise to ongoing debate over whether it’s possible to credibly convert a 2D film to 3D.

The “Pirates” sequel, meanwhile, proved it’s possible to create bad 3D even when the film is natively shot and edited in the format.

Still, 2010’s “Clash” remains the poster child for how not to do 3D, a fact that weighed on filmmakers when it came time to shoot the upcoming followup, “Wrath of the Titans.” That, too, was shot in 2D and later converted to 3D, but screenwriter Dan Mazeau says the approach was entirely different this time around.

“They had like six weeks to try to convert (‘Clash’) and I think everybody agrees that it showed,” Mazeau says during a recent media stop in Montreal.

“But in this one we really wanted to do it right…. First it was designed to be in 3D from the start and they were converting shots for the last year. We really wanted to make it spectacular so when people pay the few extra dollars and go see it in 3D that it’s worth it.”

Mazeau says conversions can look great if done right, pointing to “Harry Potter and the Deathly Hallows: Part 2” as a good example.

But purists maintain that only films shot with specialized 3D camera rigs can produce the right optical effects. Common complaints with subpar conversions include a dimmer resolution as well as headaches and eye soreness for viewers.

Canadian director Brad Peyton, who helmed the kid-friendly 3D spectacles “Journey 2: The Mysterious Island” and “Cats & Dogs: The Revenge of Kitty Galore,” says he stands firmly in the native-only camp.

He argues that shooting and editing in 3D helps a filmmaker make the best use of a scene’s foreground and background.

“At its purest form you want the movie to be designed for 3D, you want it to be (3D) from the inception of the idea,” says Peyton.

Of course, Cameron, Spielberg and Lucas don’t have a choice with their high-profile offerings — each of their much-hyped rollouts are 3D conversions by necessity.

What sets them apart is the veteran craftsmanship each filmmaker brings to the reboot, says powerhouse “Titanic” producer Jon Landau.

“I spoke to Steven a week and a half ago, he’s going to take over a year to convert it,” Landau says of “Jurassic Park,” expected to hit theatres in summer 2013. “He’s not rushing it.”

“That’s very different than a movie shooting in 2D and saying, ‘OK, I now have my final cut and I’m in the theatres in eight weeks. Let’s scramble and convert it.'”

“Cloverfield” screenwriter Drew Goddard says a more telling sign of a good or bad conversion is who ordered the upgrade — if it’s a director’s decision, chances are the results will be good; if it was ordered by the movie studio, you can expect a rush job that’s driven more by finances than creativity.

Hollywood couldn’t resist trying to squeeze extra dollars out of 3D after it saw the box office success of “Avatar,” says Goddard, who resisted pressure to 3D-ify his upcoming directorial debut, the upcoming horror comedy “The Cabin in the Woods.”

Pretty much every summer tentpole this year is slated to be a 3D release, most of them shot natively in the format.

They include Ridley Scott’s alien thriller “Prometheus,” the super-hero actioner “The Avengers,” the sci-fi romp “Men in Black III,” the claymation “Pirates! Band of Misfits,” the animated “Brave,” the horror-history mashup “Abraham Lincoln: Vampire Hunter” and the popcorn feature “The Amazing Spider-Man.”

Making a film 3D should be a creative decision, not a financial one, says Landau, insisting that’s the only way to ensure a conversion is done right.

“It is not a technological process. It is an artistic process that uses technology,” says Landau, noting that Cameron spent 60 weeks and $18 million to reinvent “Titanic,” which hits theatres Wednesday.

“Jim Cameron looked at every frame of film as if it was a visual effects shot in ‘Avatar.’ And he put his creative eye on it and that combined with the time, and also the money that we spent to convert it, I think this is a different level of conversion than people have seen before.”

Practically speaking, some films just lend themselves more easily to 3D conversion than others, adds Wente.

He notes that many of the films slated for conversion already feature a hefty number of digital effects — a factor that makes them better candidates because key visual elements are already separated from their backdrop.

“It means that if you went back to the original elements it might make it a little bit easier (to convert) than trying to transform an entirely in-camera or live action (film),” says Wente.

For a similar reason, it’s much easier to retro-fit animated films, says Goddard.

“Because it is already separated in the dimensions, you can just enhance that,” he says.

Even animated films that aren’t separated are at least easier to “cut out” from their backdrop, adds Peyton.

Landau says it doesn’t matter that “Titanic” wasn’t originally shot in 3D “because Jim shot this in a style that would have been very conducive to 3D.”

“He didn’t use a lot of overly long lenses, he do a lot of overly fast cutting. He shot it in a way that played out the splendour of the ship and the majesty of the era that lends itself to 3D.”

Re-releases are certainly nothing new.

Disney is known for intermittently bringing back classics for limited theatrical runs, while Lucas re-mastered the original “Star Wars” films and returned them to theatres in 1997.

Wente says he’d rather studios and filmmakers revisit beloved hits than churn out an inferior sequel or attempt a modernized reboot with a new cast.

“We had that wave in the ’80s when we had ‘Jaws 3 in 3D’ — you had a whole lot of franchises do that exact thing and those movies are all pretty much universally terrible. Whereas with these, at least, they’re doing something interesting with the original.”

Still, Wente admitted to cringing at the thought of his childhood favourites being altered in any way.

“If I ever hear that they put the first original ‘Star Wars’ that I saw as a child in 1977 … in 3D we’ll have a very different conversation because that’s a horrible bastardization of my childhood that can’t be allowed to exist,” he admits.

Landau says he hopes newer 3D re-releases restore public faith in what the technology can do. Raving about Martin Scorsese’s celebrated “Hugo,” he describes the format as best used to be “a window into a world, not a world jumping out of a window.”

And he dismisses any suggestions that some filmmakers are exploiting beloved classics for financial gain.

“We’re not just saying, ‘OK, let’s go re-release this and we’ll throw in one scene that we already finished,'” he says, referring to “Titanic” specifically.