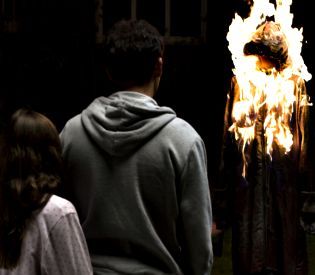 Contrived in its storytelling and finally unsatisfying, Juan Carlos Fresnadillo’s “Intruders” nevertheless has some genuinely frightening moments. How could you not when your spooky goblin is a plastic coat with a hood, work gloves and boots for hands and feet and a basket-ball for a head?

It’s the ghost of Eddie Bauer Past.

Seriously, though, the film intercuts scenes of two families — one in England, one in Spain — being terrorized by the same super-natural figure, named “Hollow Face” by the adoles-cent girl in the English family because “he” has no features and yearns to steal the faces of children.

The girl is Mia (London-born beauty Ella Purnell), a teenager who finds a box in a tree at her grandfather’s house, and in it a piece of paper telling the story of Hollow Face. Mia’s parents are tall, handsome John Farrow (Clive Owen), a high-rise construction manager who has had a brush with death at work, and the beautiful Sue (stunning Dutch actress Carice van Houten of “Black Book”).

Mia believes Hollow Face has invaded her home and lives in her closet.

The victim of Hollow Face in the Spanish family is Juan (Izan Corchero), a brave little boy who lives alone with his mother Luisa (Pilar Lopez de Ayala of “The Strange Case of Angelica”). The boy is repeatedly attacked by Hollow Face at night, or dreams he is being attacked.

At a loss, his mother seeks the aid of a handsome, young priest (Daniel Bruhl of “Inglourious Basterds”), who enlists an elderly colleague (veteran Hector Alterio) to help out. “They’re both nuts,” the old priest concludes.

“Intruders,” which like the recent “Woman in Black” is magnificently shot (in this case by Enrique Chediak), is yet another supernatural-themed movie that does not play by the rules and deliberately withholds information to keep you guessing. The best of these child-haunted films — Guillermo del Toro’s “The Devil’s Backbone,” for example — has an eerie dreamlike logic of its own.

Director Fresnadillo knows the nerve-tingling power of such things as a cat’s meow or a Modigliani-esque depiction of the crucified Christ. But he showed much more control with “28 Weeks -Later,” his terrific 2007 follow-up to Danny Boyle’s trendsetting 2002 zombie reboot “28 Days Later.”

As in “The Exorcist,” the “Intruders” screenplay by Nicolas Casariego and Jaime Marques tries to suggest a psychological explanation for all that we’ve seen. We don’t buy it. Nor do we buy the conclusion, for that matter, even if the scenes of Hollow Face in his swampy nightmare lair are probably going to give us nightmares.