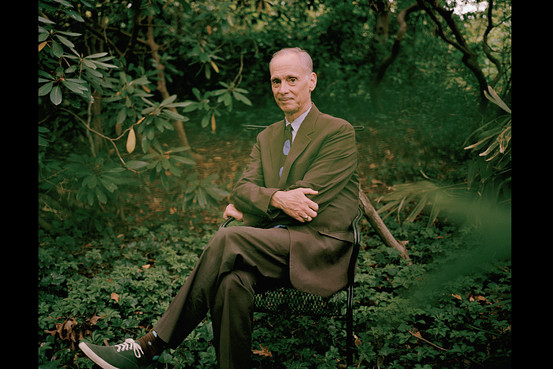 John Waters, the writer and director who emerged from the midnight movie circuit of the 1970s, has earned his status as a social critic. In 13 feature films, including “Pink Flamingos” and “Hairspray,” he gleefully presents depraved characters undermining a society of squares.

In the seven years since he made his last film, the director has written “Role Models,” a collection of essays about his idols who hurdled over adversity, including Johnny Mathis, Little Richard and a seedy pornographer. He’s also hunting down funding for his next script, “Fruitcake,” a Christmas movie for kids. He lives in Baltimore, his native city and the setting for his films, in a house purchased in 1990.

At age 65, Waters remains a celebrated figure for counterculturists but accepts that his time as a revolutionary has passed. Earlier this year, protestors at Occupy Baltimore built an encampment they called Mortville, a tribute to the criminal enclave depicted in Waters’s film “Desperate Living.” Waters supports them but declined to join. “I have three homes and a summer rental, and some of my money is in Wall Street,” he explained. He champions younger filmmakers whom he says succeed in subversion, including Johnny Knoxville and Todd Phillips. At the same time, he reviles “the new bad taste,” which he defines as entertainment that tries too hard to shock and lacks inventiveness and wit.

“If your kid comes out of the bedroom and says he just shut down the government, he should have an outfit for that.”

When I was a kid, my parents were a little uptight because the things I was interested in weren’t the proper things for a six-year-old. It wasn’t, “Isn’t that nice that he wants an encyclopedia?” I wanted to look up heroin addiction. Did it say in the Dr. Spock book what to do if your child played car accident all day? I don’t think so. It wasn’t easy to find out what to do with me.

I used to come home from kindergarten and tell my mom that there was a really weird kid in our class, and he only drew with black crayons. But that kid was me. I was creating my own character, I guess. I don’t remember that being traumatic or anything. I learned early that other people weren’t interested in my obsessions. I lived in suburban Baltimore and went to private school. They hid those things from you. “Life” magazine was my key to the outside world—they made beatniks and Jackson Pollock famous. That’s where I read about [B-movie director] William Castle. It wasn’t until much later that I discovered there was bohemia.

When I was young there were beatniks. Hippies. Punks. Gangsters. Now you’re a hacktivist. Which I would probably be if I was 20. Shuttin’ down MasterCard. But there’s no look to that lifestyle! Besides just wearing a bad outfit with bad posture. Has WikiLeaks caused a look? No! I’m mad about that. If your kid comes out of the bedroom and says he just shut down the government, it seems to me he should at least have an outfit for that. Get a look! I’m not judging what they do; I hope they don’t shut me down.

SWEET HOME Despite an affinity for organization and optimism, Waters’s decor still features fake animals and a metal sculpture of the Unabomber’s cabin.

I think my parents made me feel safe. They were horrified by what I did, but they encouraged me to keep doing it because I was obsessed, and what else could I do? My movies were very humiliating for them. No one said they were good for a very long time. Yet I borrowed money from my father, and I paid him back. I was doing something. I think they were amazed that I went around the country and got them shown and got the budgets back. Even though Vincent Canby said in the Sunday “New York Times,” “What, did he have faulty toilet training?” My mother was so mortified. I can laugh about it now; I don’t know if she does.

The kind of bad taste I portrayed never achieved wide success, except for “Hairspray,” and that happened unexpectedly. What America now exports in culture is also bad taste, but a bad taste that tries too hard to shock. I never tried to top the graphic end of “Pink Flamingos.” If I had, I wouldn’t be here today. The only way you change anything is to use bad taste to get somebody to accept something they didn’t before. I think higher of my audience. That’s why my films don’t make money.

The person who does bad taste the best in movies today is Johnny Knoxville. The “Jackass” movies are watched by blue-collar guys with their children. It’s butt gags for the whole family, and it makes $170 million. That is brilliant. That is anarchy. I don’t know how he does it.

There’s no such thing as exploitation films anymore. When Herschell Gordon Lewis made “Blood Feast,” the ultra-gory horror film, in 1963, he did it because in that moment no studio would ever make something so explicit. The underground exists, but it’s on the Internet and nobody can figure out a way to make money from it. I’m on the Internet, but it did ruin every business I’m in. But there are still filmmakers like Gaspar Noé, Lars von Trier and Todd Solondz, who are really good and transgressive and who continue to surprise me.

John Currin uses bad taste in a perfect way. His paintings look like old masters, but he paints sexual things or weird gay couples. He confuses you in a beautiful way, which is what art should be. I think Warhol’s films are the last thing that will be discovered and will be even as big as his other art. That’s still to come, when people finally have in their homes a way to display video art seamlessly, like they would a painting. The Warhol films did that style of video art first, and they’ll be there forever.

I like rap music. But bragging about being rich to poor people is really offensive. I want to hear a gangsta rap song about buying a Cy Twombly painting or dating a museum curator. I want to hear about that kind of rich. Of course, the worst is having a convertible if you’re over 20 years old. If you’re 50, please, buy a painting.
[mag0412soap2] Photograph by Adam Golfer

‘I like rap music. But bragging about being rich to poor people is really offensive. I want to hear a gangsta rap song about buying a Cy Twombly painting or dating a museum curator.’ –John Waters

My audience is younger and younger. I’m proud of that. I believe that tomorrow is always going to be better—I don’t believe my time was better. We saw things nobody will ever see again. But half my friends are dead, too, so there are two sides to that. I don’t hide my age. I think it’s like heroin. Once you start, you can’t stop. That’s my fear—getting touch-ups with needles from quack doctors in L.A. who you meet in the airport hotel between flights.

Routine is not the enemy of creativity. I’m very organized. I go out to get the paper within 20 seconds of the same time each day; my hangovers are scheduled a year in advance. I don’t have time to be nuts. If I was retired, I might be completely out of my mind, because I’d have time to give in to neurotic thinking. Now I just have to work it into a schedule. That neurotic behavior has to produce.

I can’t get a movie made right now; I’ve found different ways to tell stories about what’s obsessing me. I’ve made 15 movies. I’ve made ’em. I wouldn’t make a super-low-budget film now—I’m not going go back to when I was 18. And I can’t go faux underground. I use unions. I have four employees. I’ve gotta work.

“Fruitcake” will get made eventually. It’s a children’s movie, the only genre I haven’t done. That would frighten parents at one time, but now I think they’d be for it. It’s a commercial movie, but I think all of them are. It’s not important to scare people. I want to surprise way more than to scare. Scary would be, like, me in skinny jeans.

A 65-year-old man who’s angry is a loser. A 20-year-old angry man is a sexy leader. Nothing makes me angry anymore.