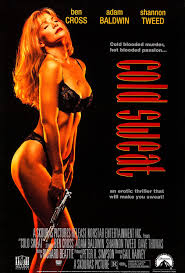 Though she gets third billing, “Cold Sweat” is unmistakably a Shannon Tweed movie—so much so that the generic title could just as well be changed to “Yet Another Shannon Tweed Erotic Thriller.” At first, though, it appears to be the story of a hit man (Ben Cross) wrestling with his career choice. Sure, killing people for cash enables him to provide all the comforts of suburbia his family enjoys, but he’s lately become haunted by one of his victims (spunky Lenore Zann), who seems to appear whenever he wants to put some lovin’ on his wife. Though he wants to take a break, he agrees to one last hit, arranged by a rollerblading drug dealer (Adam Baldwin) for one of his clients, a floundering businessman (Dave Thomas). Tweed is the businessman’s wife, and she’s not only banging Baldwin, but also Thomas’s business partner (Henry Czerny). It should be noted that in this movie, the impotent hit man is the good guy.

“Cold Sweat”‘s story offers enough potential that in more ambitious hands it could be a pretty effective thriller—possibly even a good one—but since it’s a Shannon Tweed movie screenwriter Richard Beattie and director Gail Harvey are only interested in fulfilling the bare requirements of such an endeavor. Viewers get an appetizer of those bare requirements in the form of Zann as Cross watches her and her boss go at it, the amorous couple seemingly oblivious to the fact that the office in which they’re rutting is essentially a big glass cube. But it’s Tweed’s body that’s “Cold Sweat”‘s raison d’être, and the movie soon gets down to the business of displaying it when Tweed takes on Czerny (who’s got a better body than one might expect) and then Baldwin within the same day–though not at the same time–in some lively, hard-R sex scenes. While these scenes are titillating, they’re probably only going to get people in the mood to surf the Web for some of the hardcore stuff. In short, the sex scenes aren’t hot enough to make viewers forgive the movie’s mediocrity. However, if fans of Baldwin, who went on to become a member of the Whedonverse in “Firefly” and “Angel,” and Czerny, currently in the prime time soap “Revenge,” are curious to see *more* of the actors, as it were, this is the movie to watch.

For what it’s worth, the acting is OK. Tweed isn’t a great actress but she’s better than she’s given credit for, a fact no doubt attributable to her starring in cheap direct-to-video erotic thrillers like this one. Baldwin, Czerny and Cross—whom I suspect spent his days on the set of this movie staring forlornly into the distance, mumbling: “A decade ago I was the star of ‘Chariots of Fire’…”—are all adequate in their roles, no more. Standing out like a sore thumb is Thomas, who is not only unable to make us forget his “SCTV” past, but unwilling to try, turning his role as the heavy into a cartoon. But I guess Thomas’ hammy performance doesn’t really matter. After all, it’s only a Shannon Tweed movie.