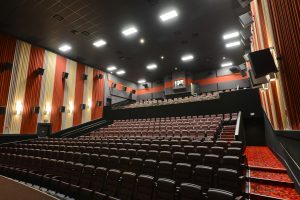 It’s 6:35 am. I have just gotten up and looking out my hotel window at the soft waves coming off the Atlantic Ocean. The night before I flew out to the Jersey shore to work with a team of imagineers to shape a concept that could contribute to a body of precedent that could define what a next generation movie theatres looks like. Of all the participants in this efforts, I am the oldest and the one who is the most stubbornly resistant to changing the present model. I know I will be wrong but I also know that the generations after me have no real concept of what true movie going is all about.

Four weeks previously on the opposite coast, this team was in Seattle. A culturally cutting edge and funky community filled with organic food s and marijuana dispensaries. I wanted to show the team what I had experienced as a rebellious movie loving youth. I was hoping that they could see one of the last true vestiges of movie going at its best.

The Cinerama Theatre in Seattle, originally opened as the Martin Cinerama screening The Wonderful World of the Brothers Grimm. The three-projector Cinerama technology offered audiences a thrillingly immersive visual experience and 7-track stereophonic sound. The movie house soon became specialized in showing such spectaculars as The Wonderful World of the Brothers Grimm and It’s a Mad, Mad, Mad, Mad World. Both formats shortly fell out of fashion, and Krakatoa, East of Java from 1969 was the last non-standard film to be shown at the Cinerama in the first era of its existence.

In 1997 developers revealed plans to turn the Cinerama into a dinner theater or a rock-climbing club. This created a grassroots effort to save the historic venue, with local film buffs circulating petitions and issuing an urgent cry for help, which was answered by multi-billionaire and Microsoft co-founder Paul Allen, himself a movie fan and patron of the theater during its 1960s heyday. Allen purchased the theater and initiated a comprehensive, multi million-dollar restoration. The grand re-opening occurred in 1999. Since then, the theater has played both classic movies and new releases.

The renovation restored the look of a great mid-20th century movie house, and also saw the installation of state-of-the-art technology and accessibility features. The theater now contains 808 seats and two screens. The first is a deep curved 90-foot-long, 30-foot-high screen, constructed of 2,000 louvered strips. It is used for presenting rare three-strip films such as How the West Was Won and 70 mm classics like Stanley Kubrick’s 2001: A Space Odyssey. The deep curve screen is stored in sections behind a smaller screen used for regular screenings of modern 70 mm/35 mm first-run movies.

In 2010 AMC was replaced as the theatres operator by an operator of a single screen theatre in Oregon.

I walked into the theatre, it’s concession stand was a bit more varied than a traditional stand, a couple of classic science fiction costumes adorned the lobby. You walked up two sets of stairs to get into the theatre, when the doors were swing open, it was like the scene out of The Wizard Of Oz when Dorothy walked out of her house and into Munchkin land for the first time.

The theatre was wrapped in a crisp yellow fabric. Lighting sconces were laid out evenly throughout. The screen was hidden from view by a plush curtain. The seats were not luxury seating (which as I have stated before is not an overly bright idea) but high end rockers. It was a brilliantly designed venue and for many of those who I had brought to this Mecca of Movies was the first time they had been in a movie theatre with over 200 seats. The Cinerama has 570 seats.

The lights went down and the curtain opened, on the millennial faces of our team was a sudden sense of awe and wonder. They now understood what I was going on about, this theatre was the physical manifestation of movie going at it’s best.
As the movie finished I realize that my point was made. Movies are spectacles and the environment in which they are show should be spectacular.

It is readily apparent that this style of movie going can never be found at the multiplex, but what is also obvious is that this style of movie going also has economic challenges and in today’s marketplace is vastly underutilized real estate. The dynamics of the modern economy may have relegated the movie palaces to the past. It is also obvious that that the multiplex with their reliance on malls may face the same fate.

Back of the shores of the Atlantic. A large amount of live performance spaces now sit idle for more than fifty percent of the time. Companies like AEG and LiveNation cannot fill their spaces with events. Dark nights mean no income, increasing this is becoming a problem. Movie theatres sit dark or with minimal use throughout the beginning of the week, and only on the weekend do they see substantive business. Similar challenges possibly a similar solution.

I think it is time to look away from the luxury seating model, making every theatre an Applebees and look towards a multi-use model. You have to do something to alleviate the singular burden of overhead.
There is a several models that have arisen across the USA that have really worked, incorporating models and offerings. These include:

Part of pour diligence had us visit a facility in Las Vegas where a theatre had been converted into a full time gaming auditorium. It was amazing to see 20 gamers compete live with an audience of 250 looking at the action of the big screen that previously exhibited movies.

It is amazing what this space can be used for…..and do not forget as VPF fade from existence (thank goodness) there is going to be an explosion of alternative content that can be skewed to meet the demographics of your audience.

Change is coming…..following the path of the major exhibitors is not the way to go. Chart your own path. That what I am doing…..and it’s pretty exciting.