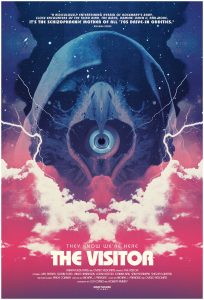 I understand how some (perhaps most) viewers found The Visitor an incoherent mess, but it may be due to poor editing since its U.S. release in 1979 which, evidently, was also released theatrically to international audiences. However, I am only speculating, but I do know the original Italian version is longer. That version may help to fill in the gaps and possibly extends some of the more emotional scenes in the film which have been severely cut. As I was watching The Visitor, I was disappointed at how abruptly some of these scenes concluded. I wanted and expected a deeper connection to the material and the characters. Regardless of these setbacks, the movie is unquestionably unique on many levels, and I didn’t find it difficult to follow. Perhaps because it IS so outlandish, I enjoyed fitting the pieces together. There was never a dull moment with so many things happening throughout the course of the story line. The atmosphere was classic 70s style, and the acting was not bad at all despite (again) the poor editing.

The Visitor is an Omen copy to a degree, but instead of demonic forces at work, the film centers on an evil alien force. This alien force is actually an escaped prisoner named Zatteen, who finds refuge on Earth many years in the past after fleeing from a deadly battle in space. Before his eventual death, he impregnates a number of women, passing along his mutated genes and allowing his future offspring to possess telekinetic powers. Since Zatteen had evil intentions and only wanted to kill and destroy others, his children are of the same breed. In order to carry out his catastrophic deeds, a cohort of wealthy men led by Dr. Walker (Mel Ferrer) is assembled to ensure his plan of world domination succeeds. This mission is challenged when only one woman on the planet in the present day bears the ability to fertilize Zatteen’s seed, and her name is Barbara Collins (Joanne Nail). Barbara has already given birth to Katie (Paige Conner), a now eight year–old daughter who shows us she is no angel with some of the wicked things she says and does. The cohort wants Barbara to give birth to a son so he can become the new Zatteen of his generation. This task of impregnating Barbara is given to Raymond Armstead (Lance Henriksen), who must convince her to marry him despite the fact she is unwilling to commit to marriage. Barbara, of course, does not realize she has the special gift of carrying Zatteen’s seed in her womb, but she knows intuitively that something is wrong with Katie. That sets up the premise of The Visitor. Of course, there are birds that attack on command, a watchful babysitter (Shelley Winters), a police detective on Katie’s trail (Glenn Ford), a mysterious butler, a Jesus–like character who tells tales of the evil Zatteen to a group of young bald–headed children, and the good–guy visitor himself (John Huston), who congregates his disciples on the roof of a large skyscraper. The first fifteen minutes of the film unravels the basis of the plot, but as the viewer, it’s important to listen to the dialogue. A lot happens quickly.

Whether you like the film or find it a mess, to say it’s not an entertaining effort would seem unfair. The only thing that really was annoying to me was part of the soundtrack dealing with the discotheque music. It was way over the top and out of place for this type of picture. I’m sure it fit the times and some people enjoyed it, but if the movie is to be taken seriously on any level, then that music has to go. If the movie was intended as hype – which doesn’t appear to be the case – then the histrionic melody is warranted. On the other hand, the moody, ambient music was excellent, and the ending was solid. Give this cult classic a shot and be prepared to go on a strange journey of plot twists and turns. Watch it on a rainy day when you have the time or are feeling ambiguous and/or disconnected from the world. We all have those days sometimes. That’s when The Visitor will leave you a little numb, confused, and scratching your head… but in a good way.