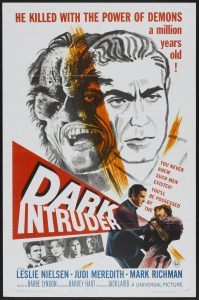 This fast-paced film breaks no boundaries, and yet remains a solid little chiller-thriller with an amusing central performance from Leslie Nielsen. This is one of those films which they just don’t make anymore, an old-fashioned thriller in which Nielsen and his friends try to work out the motive of a murderer and stop him killing again. It’s all very conventional, and yet there is something about it which raises it above average. Perhaps the atmospheric scenes of a shadowy mutant stalking about in the shadows, murdering people, which brings to mind one of the better versions of Jack the Ripper. Or maybe it’s Nielsen himself, who brings a lot of comedy to the film, perhaps practising for his later roles as a comedy star in hits like the NAKED GUN films.

Here, Nielsen plays a character who acts like an American Sherlock Holmes, although this man’s identity and history is never revealed to us (this was to be the pilot for a never-made television series). His character isn’t very well developed, which is probably a flaw in the script instead of with Nielsen’s light performance. I mean, he keeps on disguising himself as to protect his identity, but for what reason? If Nielsen’s character had been fleshed out a little more it would have given us a stronger lead to identify with – as it is, we don’t really feel or care for him throughout the film.

The plot keeps us guessing by dropping clues in every ten minutes or so (the film only runs for an hour, so we never have long to wait), and even draws in some occult science – including a horrible statue, made with flesh and bone, which feels “hot”. The twist ending is surprisingly downbeat, and all the more effective (although Nielsen’s closing jokes seem to be rather misplaced). The makeup for the deformed killer is quite good, and there’s a wonderful transformation sequence where a man dissolves from being handsome into a clawed fiend. The violence, unfortunately, is kept strictly offscreen, although there are a couple of fight scenes which involve Nielsen getting scratched by the killer’s clawed hands.

Mark Richman is very good in a supporting role and reminded me of a young Charles Dance – his blackouts here are especially unnerving, when we don’t know what they mean. The only false note is with the insubstantial female lead, who literally does nothing for the film’s short running time except scream occasionally. A sign of the times. There’s even a dwarf servant in there for good measure. This light, easy entertainment is never made anymore, and I really do miss it after watching films like this. DARK INTRUDER is an engaging, and best of all, fun thriller, an oddity which deserves to be tracked down.