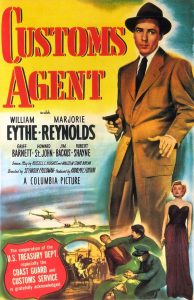 This is a moderate sub-B picture which has nothing wrong with it, but has little to offer. The one very interesting thing is that in 1950 the early anti-biotic drug strepto-mycin was so rare and so controlled (only tiny amounts could be exported from the USA. its only source, on special licence) that there was a big market for smugglers who could send it to China, where it was worth more than narcotics. The whole film is therefore based on a customs agent who tries to expose the criminal ring who are stealing strepto-mycin and smuggling it into Shanghai. The film begins in Shanghai, where we get a couple of shots of stock footage of the Bund, and one two-second glimpse of Nanjing Xi Lu, and the rest is cheap California sets with some extras grabbed from Chinatown. The lead is played by William Eythe, who I must say seems pretty unexciting to me. This is a walk-through-it-and-join-the-dots story. Anyone who is an undemanding viewer can sit through this without being offended, and be entertained in a middling manner.