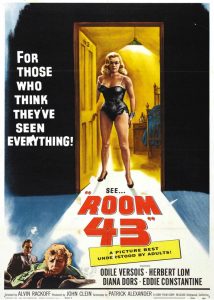 Among the sundry delights to be found in this British white slavery sexpose is the gonzo turn by Herbert Lom. As London’s mac daddy supreme Nick Biaggi, Lom is a sight to behold, a horn-doggie dandy in homburg, lapel carnation and spats (au courant fashion be damned). He’s low-key at first, oozing oily charm and generosity, the better to bamboozle naive French waif Odile Versois, who’s been lured into a life of shame by Lom’s field procurer/mamasan/mistress Brenda De Banzie. But behind closed doors it’s a whole ‘nother Herb. Channeling his inner Michael Gough, he’s all over Odile like a cheap suit, manhandling her love handles and assaulting her face with wet, slobbering kisses. It’s truly an unhinged spectacle; even Lom’s toupee looks like it has an erection.

Also in the house: affable tough guy Eddie Constantine as the world’s least likely Canadian, the always welcome Robert Brown (Tumak’s dad in One Million Years B.C., ‘M’ in the Bond films of the ’80s) as a two-fisted cabbie who rouses his fellow hacks to do battle with the ‘ho-mongers, Diana Dors, poured into bum-busting skirts and Frederick’s of Soho lingerie, as a hooker with a score to settle, and, as the groom at a wedding party, a remarkably young Michael Caine.

All this plus a wacky weed-induced dream scene that must be seen to be disbelieved.