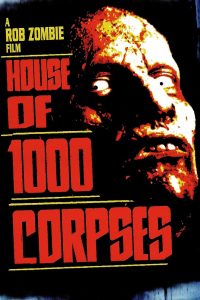 Now having said that, this is a film for me. It is a film for true horror fans, the kind that stay up and watch Dawn of the Dead and The Beyond, who know who Lucio Fulci and Dario Argento and George Romero are. This is a film that was meant to be seen by people like this and will only be enjoyed by people like this. This is not exactly mainstream stuff here. Only a small percentage of people enjoy this stuff, and for those people, this film is a true rivival of classic exploitive horror.

Rob Zombie has created a homage to 1970’s exploitation/horror films, and he has been extremly successful in achieving that goal. The film borrows largely from Texas Chainsaw Massacre and Last House on the Left, with his own little bits of original demential thrown in and an assortment of other horror film references. The film tells the tale of four teenagers who are terrorized and tortured by a bizarre southern family living in a remote farmhouse in 1977. The film uses all sorts of camera tricks–negative colouring, split-screens and seemingly random inserts of grainy snuff-like footage of various S&M and gore images; the off-the-wall effect is similar to what Oliver Stone did in Natural Born Killers. The film is not about plot, or about characters. Its purpose is to shock and disturb, to serve no other function than to entertain through exploitation and disgusting and bizarre violence. Just as you think the limits of weirdness are approaching, Zombie takes the film a step farther, and before long you surrender yourself to the mercy of the film and just accept things for what they are. The film has the feeling of an out of control freight train being piloted by a madman and the climax of the film is truly bizarre. The reviewers who wrote the film off as overly-sadistic with little in the ways of character development, plot or suspence have come to see a different kind of film, perhaps more at home with titles like The Sixth Sense or Silence of the Lambs. The have no busineness debasing a great film like this.

Rob Zombie has created a film that is both a homage and derivative at the same time; most things in the film have been done before, in one shape or another, and the level of gore is a fraction of what was intended, due to its shameful R-rating. To see the inevitable Unrated Directors Cut on video is going to be a true horror experience.

But this film is something has hasnt been seen in decades and it has been made with the utmost care that only a true horror fan could provide. It is a film made by horror fans for horror fans, a true labor of love by Mr. Zombie, despite some flaws. If you arent sitting the theater going “hey, theres Bill Mosely from TCM 2!” or “hey, that shot is a homage to the cover of Evil Dead!” or “hey, he wears peoples skin like Leatherface!” then you probably arent meant to be seeing this film. But for those who are, the film is a true gem and a rarity; it is a kind of film that hasnt been seen on the screens in over twenty years and probably wont be for another twenty years. Get out there and enjoy this rare experience while you still can.