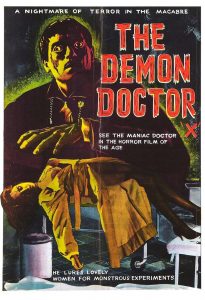 ‘The Awful Dr. Orloff’ is obviously ripped off the extraordinary ‘Eyes Without A Face’. I didn’t really have a problem with that in itself, only that what Franco does with such potentially rich material. Which is, nothing much. Sadly this early Jess Franco effort, though entertaining enough, never reaches the surrealistic heights of his late 60s/early 70s peak (‘Vampyros Lesbos’, ‘Succubus’,etc.).

My enjoyment of this movie was lessened by it being the badly dubbed American version with inane dialogue. The way English versions of European horror invariably dumb down the scripts/characters is one of my pet peeves. Why do they do this? Lack of respect for genre movies? Or some kind of reverse Hollywood snobbery? Not having seen the original Spanish cut though I’ll give this movie the benefit of the doubt. It just might be better than I think.

Veteran character actor (and Franco regular) Howard Vernon (‘Alphaville’) is excellent in the title role, and his side-kick Morpho (Ricardo Valle) is suitably menacing, but the Inspector Tanner character is a joke, and the scenes of police “procedure” really drag this movie down. Disappointing overall knowing what Franco would achieve in later, more original movies, but still a reasonable way to waste a rainy afternoon.