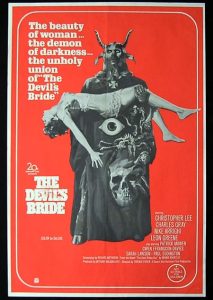 THE DEVIL RIDES OUT, while it came along almost 10 years after Hammer first started churning out horror films, is possibly the best horror film they ever produced. Even though HORROR OF DRACULA and CURSE OF THE WEREWOLF rank highly with fans and critics alike, THE DEVIL RIDES OUT is just now receiving the acclaim it deserves.

Christopher Lee turns in one of his best performances as Duc de Richelieu, a religious man who stands firmly against witchcraft. His friend Simon has been chosen for baptism into a Satanic cult in the English countryside and Richelieu, along with his friends Rex and Roger, intend to stop the dastardly deed from occurring. To avoid the wrath of the Mercata, the leader of the cult (played by ROCKY HORROR PICTURE SHOW’s Charles Gray), Richelieu draws an ancient protective circle and places all the involved parties inside to spend one terrifying night trying to protect themselves against demons and spirits of all kinds.

Not your average Hammer production, DEVIL RIDES OUT was released in the U.S. as THE DEVIL’S BRIDE since RIDES OUT was deemed a title for a Western. RIDES OUT makes much more sense during a certain sequence featuring the Angel of Death riding a jetblack horse. The visuals in this film are astounding: a giant spider, a goat-headed devil, a black man with yellow piercing eyes, and the infamous goat’s blood scene. All these and more are in store for you when you see THE DEVIL RIDES OUT. I recommend this not only to initiates of the Hammer cult (no pun intended), but also to those who want to see one film that will make them fans. This or HORROR OF DRACULA should do the trick.