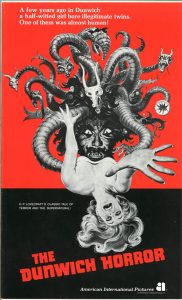 Sandra Dee (the original GIDGET to you beach bunny fans) is Nancy Wagner, a virginal blonde student at Miskatonic University who meets Wilbur (Dean Stockwell), the grandson of a warlock who was lynched years earlier.

Wilbur shows interest in the Necronomicon and in Nancy, because he needs both to open a gateway for demons called “The Old Ones” to enter our world. He invites her back to his secluded home in Dunwich, where he keeps her drugged, plots to sacrifice her on a seaside altar and fights with his senile, ranting grandfather (Sam Jaffe). A strange-looking, barely-seen, multi-headed flying monster that sees things in negative (and looks kind of like GHIDRAH!), is kept locked in the attic, but escapes for the silly finale.

It’s amusing to see the once-wholesome Sandra Dee saying sex is “great” and simulating orgasm while being groped on an altar, but she should also get credit for delivering a decent performance. Ditto Ed Begley in his last role as a heroic professor. Stockwell is so soft-spoken and weird it’s hard to gouge just how good (or bad) his performance really is.

Compared to most recent H.P. Lovecraft adaptations, this isn’t half bad and it all looks very cool and colorful. Roger Corman was the executive producer. Director Haller also made DIE, MONSTER, DIE, which was based on Lovecraft’s “The Colour Out of Space.”