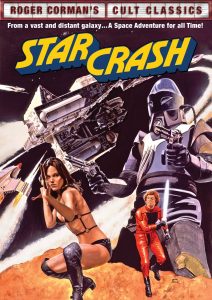 Take Caroline Munro. Put her in a leather space bikini with matching boots, give her a ridiculous looking laser gun, have someone get some oil on her chest and we are talking entertainment. Now, add a plot that is reminiscent of Star Wars, right down to having android or helmeted characters who’s faces we never see, inject some heroics and derring-do, paste on a very cinematic sounding musical score by James Bond alumnus John Barry and presto! you have a movie.

It all starts with Ms. Munro and that leather bikini though, make no mistake about it. This movie is a stupid, kitschy, clunky, dated, addle-brained and witless Star Wars ripoff that might be one of the best science fiction movies ever made. All that is required for anyone to appreciate it is a familiarity with science fiction, an appreciation for female breasts and a sense of humor. If you can’t manage to scrape that up skip this one and maybe rent a documentary on Stalingrad. If you can, seek it out immediately. This is what those Alfonse Brescia movies were like, except it’s story actually makes sense.

Some folks would refer to this as a “camp classic”: NO. Camp is done as a parody or for laughs, like Monty Python having the Royal Scotts Guard do a Burt Bacharach production number. This is KITSCH, like Queen’s “Bohemian Rhapsody”, a Kit Kat clock and those salt shakers made to look like Tiki Torches. Or a ceramic plate featuring designs with corn cobs, meant to only be used when you eat corn on the cob. Kitsch can certainly have a sense of humor about itself but it has to be played straight, like “WKRP In Cincinatti” — if you play it for laughs then you are making “Mork and Mindy”.

I will leave it to others to describe the plot. STAR CRASH is about the whole idea of merging a Star Wars type adventure with genre film elements that border on exploitation, and thankfully they found a willing participant in Ms. Munro, who’s presence is the real reason to bother seeking this out. The klutzy 80’s science fiction design is also a marvel to behold & there isn’t a dull moment to be had. I agree with the other comments who pointed out that this movie has fifteen times the imagination, soul and humanity of the three most recent Star Wars films put together. Some touches of inappropriately graphic violence and risqué content only add to the forbidden fruit factor that this movie has going for it: Without any redeeming social consciousness factors it is essentially an extended guilty pleasure piece, and what with the world coming to an end & all, heck I don’t see anything wrong with that. We need more fun in the world and if nothing else, STAR CRASH is *FUN*.

Some of the special effects are actually quite impressive (especially if you can find the widescreen version shown on a French DVD release which does have the uncensored 93m. English print), or at least are evocative of the Ray Harryhousen adventures that this movie seems to be patterned after. I admire the film’s reckless energy, it’s devotion to wanting to see if they could make it taking priority over whether or not what they ended up with might look stupid. Try this on a double bill with Aldo Lada’s equally outrageous THE HUMANOID with Richard “Jaws” Keil. You may laugh yourself into fits but you certainly won’t be bored, and fetishists will have a field day taking screenshots of Ms. Monroe’s various camera angles for their own private digital slide show to enjoy without the bother of even watching the film. Like a Spaghetti Western this is a collection of moments. The majority of them pay off and in the end STAR CRASH emerges as a superior example of Italian Spaghetti Sci Fi as well as a relic of a bygone era that will hopefully never be revisited.

9/10: Another movie that should be loaded onto a space probe and fired in the direction of a nearby solar cluster to show other possible worlds the best & worst of what humanity had to offer. And that our women are hotter than their women.