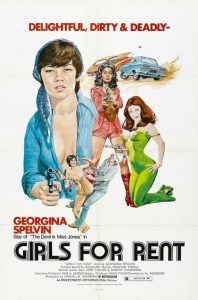 The Syndicate has hired Donna to blackmail a politician. She’s supposed to drug him, but the drug ends up giving the old fellow a heart attack(which was the plan all along, unbeknownst to Donna). Donna doesn’t want to be a part of this and high tails it out of town and heads for Mexico. Almost immediately after leaving, the two women who recruited her, Erica the assassin and Sandra the prison escapee, set out to catch and kill her for trying to run. Then, a series of “unfortunate events” occur. Donna’s car is stolen by a hitchhiker at a rundown gas station run by a tubby born-again Christian. Then Donna accepts a ride from an old gem collector who promptly drives her in his old Datsun back to his place to pleasure his idiot son. While she leaves the son in the lurch, Donna steals the truck and takes off down the old dirt road for God knows where with barely any fuel. Meanwhile, Erica and Sandra find the hitchhiker and blow her brains out then speed back to the filling station to find Donna who ironically was there when they stopped to ask Tubby if he’d seen the blue Pinto Donna drove. Then they find out where the old man lives and burn rubber out that way. WELL! By this time, Donna has indeed run out of gas and as luck would have it, a bo-hunk with the traditional 70’s beard pulls up out of nowhere and she remembers him from the gas station. Well, she’s got no time to worry if he’s a serial rapist or whatnot, so she accepts a ride from him back to his campsite in the mountains. Then things get hairy. Erica and Sandra find the old man’s house and promptly pistol whip him then later, Sandra rapes his idiot son and puts a bullet in his skull just as he’s about to, well, you know.

Now, I don’t want to spoil the ending chase scene which completely comes out of left field and doesn’t at all have the sort of storyline you’d expect from Hollywood. Let’s just say the words Dune Buggy and Machine Gun are something you need to be familiar with for the last five minutes of this flick.

I imagine they slapped this film with the silly video title of I Spit on Your Corpse to cash in on the popularity of the cult hit I Spit on Your Grave. This isn’t a revenge thriller in that vein at all. For fans of bad films, you’ll be surprised at the final scenes which actually are pretty good. And! the music! The soundtrack was the best thing about this movie. Real jazzy, almost blue music, that really changed to meet the needs of the action scenes. Very surprising, indeed. Overall, this film is the absolute best 70’s adult film ever made….minus the sex scenes. There are several gratuitous bare breast shots and most of the babes in this movie were probably in other forgotten adult films, as they stand around to look hot and have no lines. If this film had been shot in two versions, one being hardcore XXX, then it would rate much much higher, I wager.

This isn’t a well-known film and I only watched it because I mistakenly thought it was a horror movie. Also, I had never seen any other “work” done by Georgina Spelvin so I didn’t know which character she was until the movie was over. I can’t believe I’m actually sort of recommending this, if you like cheese.