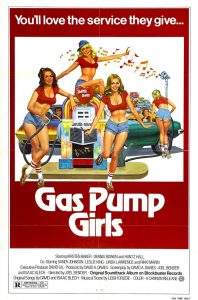 This movie begins with 3 members of a local motorcycle gang known as “the Vultures” playing a trick on some high school students during their graduation. Later that night a man named “Uncle Joe” (Huntz Hall) has a mild heart attack and as a result cannot operate his local gas station because of it. Fortunately, his niece, “June” (Kirsten Baker) comes up with a plan to invite her high school friends to help run it while Uncle Joe is recovering. What none of them realize however is the extent at which a new service station across the street has ruined Uncle Joe’s business. And the owner of the new gas station, “Mr. Friendly” (Dave Shelley) has no intention of allowing anybody to interfere with his profits. What Mr. Friendly doesn’t count on is the ingenuity of June furthered by the Vultures when they decide to join her team. Now rather than reveal any more I will just say that this is the kind of grade-B film which could have only been produced in the 70’s with the music, hair styles and everything else clearly standing out. Yet in spite of the obvious low-budget, extremely simple plot and poor acting, the movie itself wasn’t too bad all things considered. What I found most enjoyable was that the humor was so basic and corny that it was actually funny–in a weird sort of way. Likewise, having a couple of cute young actresses like Linda Lawrence (as “Betty”) along with the afore-mentioned Kirsten Baker certainly didn’t hurt either. That said, while this film clearly isn’t a good picture by any means, it wasn’t that bad either and because of that I have rated it as just slightly below average.