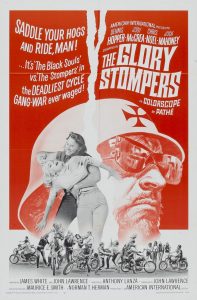 Excellent riding sequences and plenty of action made this a great movie to watch. You won’t see the excessive carnage that I saw in “The Savage Seven” and “The Losers” but this movie has more than enough brutality to qualify it as a violent biker film.

The Glory Stompers starts off by introducing you to the two basic types of bikers. Those who ride for pleasure and those who look for trouble. The Glory Stompers believe in fun and friendship while the Black Souls behave like opportunistic predators.

The plot is rather simple yet engrossing. The Black Souls ambush a lone Glory Stomper, Darryl (Jody McCrea), and leave him for dead. The only witness is the Stomper’s girlfriend, Chris (Chris Noel), so the Black Souls decide to silence her and cash in on her misfortune by selling her to some Mexican criminals. When Darryl regains consciousness he sets out alone after the Black Souls.

The Black Souls make up an interesting group of villains. Dennis Hopper is brilliant as Chino the tough and ruthless leader. Chino’s lady, Jo Ann (Sondra Gayle), can best be described as a knife-happy psycho. Paul (Jim Reader) seems to be too civilized to ride with the Black Souls until we learn that he is Chino’s younger brother and that they have no other family. Magoo (Robert Tessier) is the largest and most sadistic member of this group. Mouth (Casey Kasem) and Monk (Lindsay Crosby) are the comic relief of the Black Souls as they spend most of their time just clowning around together.

While Darryl is following the Black Souls he runs into Smiley (Jock Mahoney) who used to be a vice president of the Glory Stompers. Now older and wiser Smiley becomes Darryl’s mentor and joins him on his pursuit of the Black Souls. They are eventually joined by Darryl’s best friend and fellow Stomper, Pony (Gary Wood), and Pony’s new bride Doreen (Astrid Warner). This posse of Stompers pursues the Black Souls into the desert where the Black Souls are waiting in a ghost town to sell their captive to the Mexican criminals. This sets up the final showdown.

During my teens this film was one of my personal favorites. If you like “Good versus Evil” and “Damsel in Distress” movies, set to a motorcycle theme, then you should find this one entertaining.

On researching this movie I found some interesting trivia about three of the actors who played Black Souls. Casey Kasem was inducted into the Broadcasters Hall of Fame in 1995. Casey was also the voice of “Shaggy” in the Scooby Doo cartoons. Robert Tessier shed his hair and went on to play bald-headed, tough guys most notably in “Hard Times” with Charles Bronson and “The Longest Yard” with Burt Reynolds. Lindsay Crosby’s father was none other than the legendary singer/actor Bing Crosby.