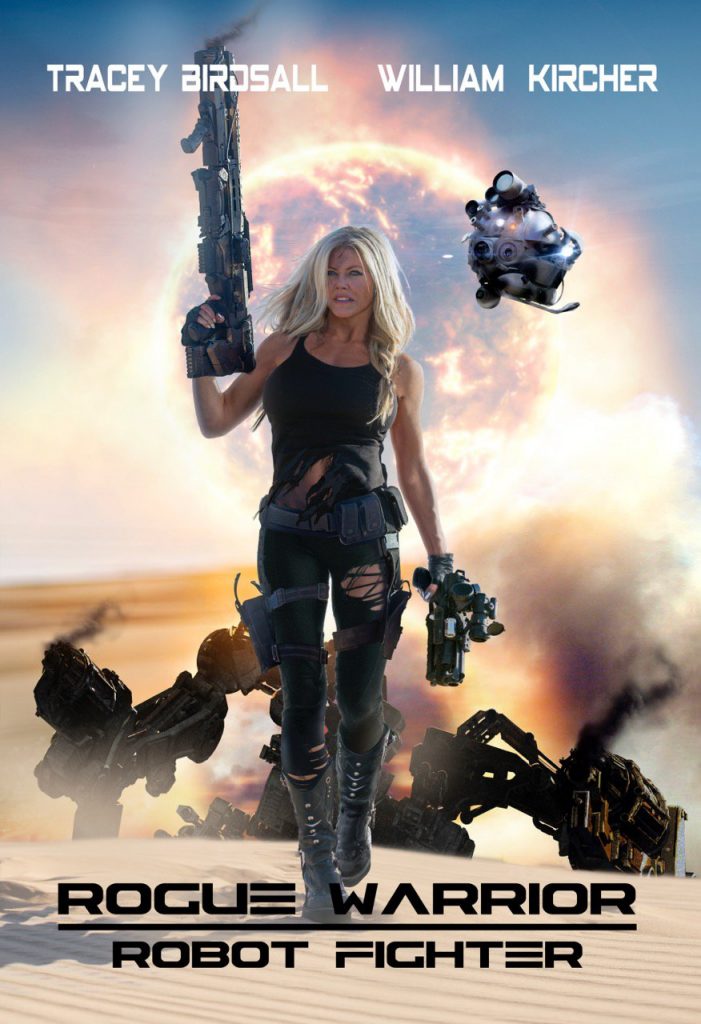 Rogue Warrior: Robot Fighter, described as a mix of “Mad Max” and “Star Wars”, is a science fiction film set in the distant future depicting the overthrow of humanity by artificial intelligence on Earth and other worlds. Birdsall plays Sienna, a resourceful rebel on a quest to take down the evil empire of robots. 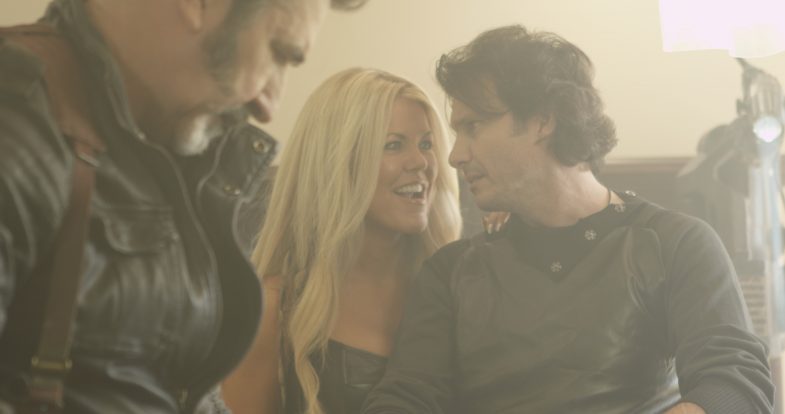 Official synopsis:  A few decades from now… Sienna, a rebellious robot-fighting arms dealer, lives on a post-apocalyptic Earth. When the cities start to fall under the control of the A.I. Scourge, a hyper-weaponized robot army, Sienna decides to leave the Earth and journey to the centre of the galaxy, seeking a mythical weapon that can neutralize any form of A.I.

Pursued by giant machines, Sienna loses everything she cares about in an effort to save the last vestiges of humanity in an A.I. controlled galaxy. 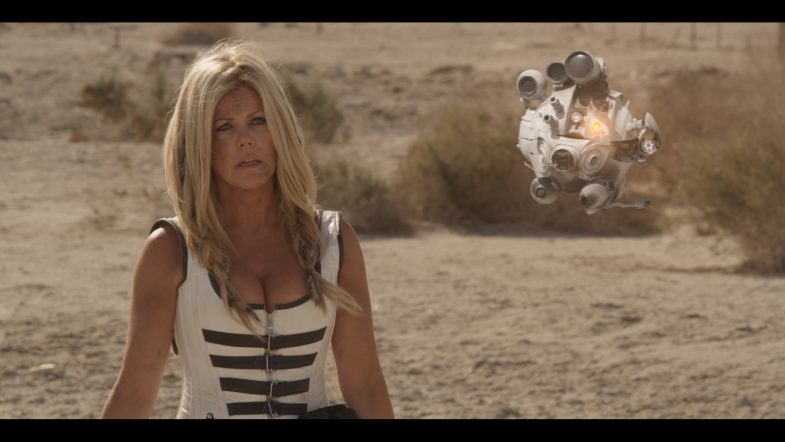 Tracey Birdsall and Neil Johnson have worked together on films in the past and teamed up to produce ROGUE WARRIOR.  This movie will always have a special place in their heart as they both pushed their mental, physical, and creative limits to make the film.

“Rogue Warrior was an extreme vision for Director Neil Johnson – one that I was happy to delve into with my heart and soul,” tells Birdsall.  “When a director, such as Neil, trusts you with such a rich and multi-faceted character, you have no choice but to do everything in your power to impress. Unfortunately, it’s gut-wrenching work that not only takes endless hours and months preparing for – but also endless months of healing from both physically and emotionally.  I told him “I would do it all over again tomorrow in a heartbeat!” and thus he pushed me to even more treacherous character zones in the newly wrapped The Time War. It’s amazing the toll these projects take on an actor – but it’s even more amazing to have a director of this caliber put his faith in you. As an actor, we live for this. As an actor, this is the stuff our dreams were made of.” 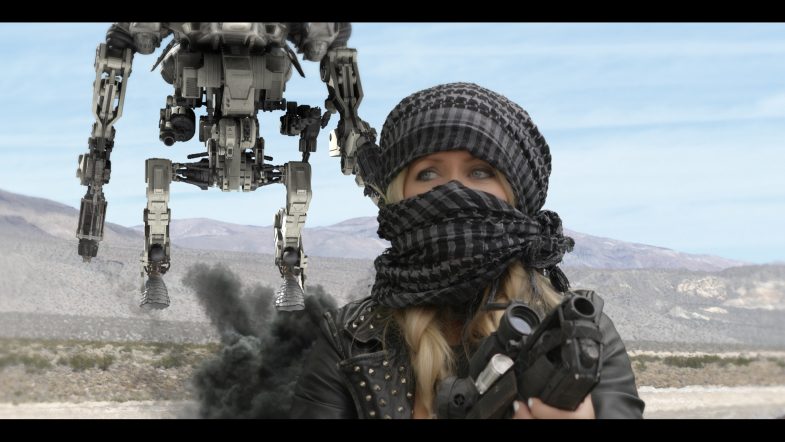 “There is a reason why she is the lead actor of the biggest film of my career,” Johnson says about Birdsall as Sienna.  “As a director of over a quarter of a century and having worked with thousands of actors, I have never encountered anyone so facilitating and driven as Tracey.  When I pushed, she gave.  When I thought she could take no more, she gave more than any normal human being could give.  I think I have actually pushed Tracey too far…  I know that I was heavily traumatized with what I made her do… I can only imagine what she is dealing with.  She took it all in her stride, but the acting depths she has gone to has filled me with serious PTSD.” 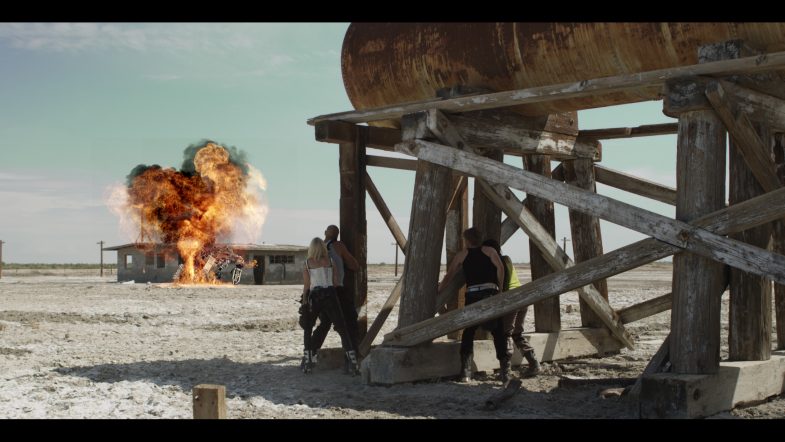 ROGUE WARRIOR provides stunning scenery and effects, but even better it tells an excellent and structurally sound character driven story.  In the opening scene, machines are trying to take over mankind in an intense and exciting battle.  After the war and a majority of civilization is wiped out.  We then meet Sienna (Tracey Birdsall) and learn that her goal is to destroy the scourge and stop the machines.  Throughout the film the audience is highly entertained with Sienna’s combat expertise and she can kick some serious butt.  Sienna’s character develops as she learns a lot about herself and some is very difficult for her to grasp which intensifies and boosts the momentum of the story.  The more she discovers about herself, the more she needs to know, but she never loses focus of her main goal to save mankind. 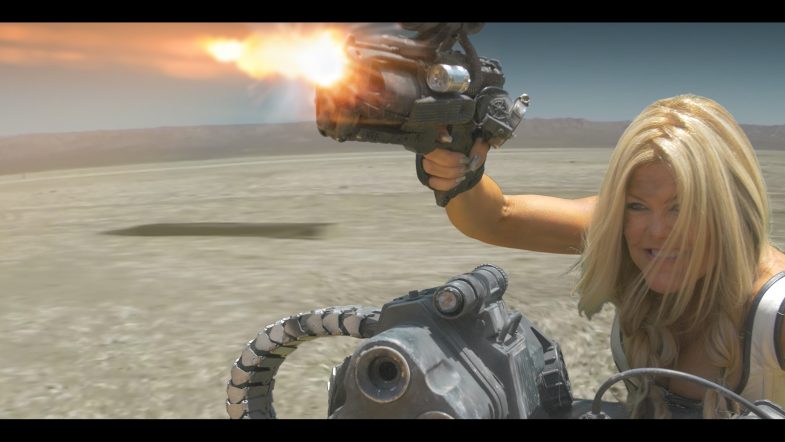 Sienna’s story and goal combined with the intense action, spectacular settings, and stunning visuals makes ROGUE WARRIOR one of the best action films of the year.

Mark your calendars for June 2nd and absolutely check out ROGUE WARRIOR!