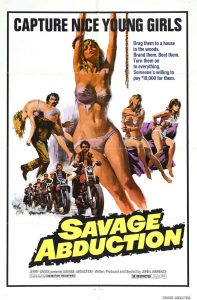 Very little to do with bikers, biker gangs and the “Ride Free, Ride hard” attitude. There are no 1% riders here. What we are left with is mostly a bad psychological mess with a wealthy homicidal maniac, with an Oedipus complex who likes to torture and kill young, pretty women. They should have just turned this into a slasher film, and taken the whole notion of bikers out of it. It would have worked better that way.

Whe are given 3 tough hombres who are supposed to be a “Biker Gang”. These guys would not be allowed in tricycle, little less less REAL motorcycle gang. They huff and puff and try to act as if they were the real deal. They’re dirty, bearded and have poor manners. That is supposed to convey a biker to the general public. But the closes they have ever been to a real biker gang is when they all sat together and saw a documentary on the Hell’s Angels on TV. they could’not punch their way out of a wet paper bag.

The abducted girls are your typical dumb, cute and sexy 17 year old critters that always seem to either be in the wrong place at the wrong time, or just make stupid choices in life. Like try to hitchhike and accept a ride from two derelict’s who pull up on choppers. Where do they think they will be taken to? Starbucks for a latte? A church ice cream social? No you stupid bimbo’s. To their lair for a bit of fun at your expense. But even this is sad. There is no fun at the pen.

We are all left with fairly good acting wasted on very poor lighting, bad writing, and none of the joys of rebelling against the man. What a waste of celluloid. I can see why after 1972 only a handful of biker films where made. All dying after 1975.