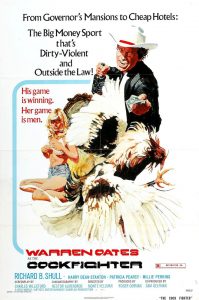 “Cockfighter” is not an easy movie. It doesn’t have one of those carbon-copy scripts that you can write like cheap romance novels. It doesn’t have characters that cater to what the stars think will make them look good. There is no spoon-feeding here.

Just re-released for sale on tape (and DVD), this film is now available again for those who like to watch a movie that honestly takes you someplace that few of us have ever been. Warren Oates plays a character who lives by a moral code much like the people in the pulp westerns and detective stories — a man’s honor is shown by his actions, and his willingness to see his convictions through to whatever end may come. After letting his pride destroy his chance of winning a high honor amongst cockfighters, he takes a vow of silence that will last until he earns that honor.

While the scenes of actual cockfights can be distressing, they are essential to showing the viewer the main character’s struggle as well as his obsession. When the character’s love interest is added to the equation, the story takes on an epic quality formerly reserved for tales of a knight trying to win the love of his lady and the respect of his peers.

Perhaps that may be giving the film too much credit, but I don’t think so. While there are plenty of exploitational elements to draw a wide audience, the actual meat of the film is a man seeking redemption and honor.

Find this movie. Watch it. Enjoy it. And see if it doesn’t stick in your mind a heck of a lot longer than the average contemporary “Hollywood” movie.