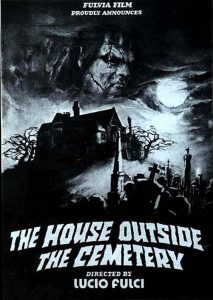 If I have to be objective, I would say that I can understand why some people criticize “The House by the Cemetery” for being a film that lacks of logical explanations all the way through. As a matter of fact, regardless of how much I love this film and how biased I can be, I admit that it is overflowing with nonsensical and misleading sequences that only add a little bit of confusion. This is not the only occasion in which Mr. Fulci is accused of being ambiguous and practically senile for developing such random and unsystematic states of affairs in one his films. However, it is not the only time in which the results are unquestionably effective and unforgettable either. I think we ought to accept by now that several Italian horror movies, let alone the ones directed by Mr. Fulci, are not exactly to be praised because of their plot and exceedingly appropriate logic. The high point in “The House by the Cemetery”, along with many other films directed by Lucio Fulci, is without doubt the atmosphere and pleasant demonstration of fear-provoking imagery.

In “The House by the Cemetery”, Dr. Boyle moves to the countryside in New England with his wife, Lucy and his obnoxious little son, Bobby. His purpose is to continue an unfinished research and finding out what happened to his colleague, who killed himself and slaughtered his mistress for no apparent reason. Dr. Boyle, who is pretty excited about the research and the fact that he’s going to earn five thousand dollars extra, tries to cope with the constant ranting coming from his wife and little Bob, who claims he sees a little girl who says they shouldn’t go to the house. Despite the consequences, Dr. Boyle prepares for his research, without even considering that Bobby’s so-called hallucinations and lies should be taken seriously. In the cellar of the house, there’s something waiting for them. Something that is beyond anyone’s nightmare and the Boyles are about to find out what it is.

Like I said before, it seems that many people were deeply offended by the lack of logic and while I’m not saying that this is untrue, personally, I don’t think it’s a blameworthy feature. Building up an extremely sensible story, obviously wasn’t Lucio Fulci’s strongest suit. However, what this film lacks of logic is surpassed with other things, for instance, Dr. Freudstein, who is definitely one of the most horrendous baddies and his bone-chilling appearance throughout the last minutes. The sequence in which we see the family trying to fight against this outlandish creature, taken from Mr. Fulci’s worst nightmares, is by far one of the most shocking and professionally made scenes I have witnessed in a horror movie. Not to mention that there’s also a nice share of gore as a bonus for those who are always in the mood for brutal murders and guts all over the place. It seems like I may be one of the few who enjoyed the nonsensical succession, like for example, the flash-back in which little Mae sees mannequin losing her head, or the eyes close-up or the arrival of Ann to the house. Those were some of the most criticized and somehow far-fetched little details that I personally enjoyed, for contributing to develop Mr. Fulci’s nightmarish atmosphere, which is somehow his trademark. The music is also one of the things I really enjoyed about this film, although it seems like not many people noticed that little nicety. It’s quite melancholic and beautiful. The same music is used from the beginning until the end, which somehow helps to create a less fearful atmosphere in the right moments. I think “The House by the Cemetery” is one of those films that only pleases horror fans who can appreciate Mr. Fulci’s movies for what they are, instead of focusing on the ambiguity and the lack of logic. This movie is enjoyable for its atmosphere and nightmarish sequences and frankly…I wouldn’t want it any other way.