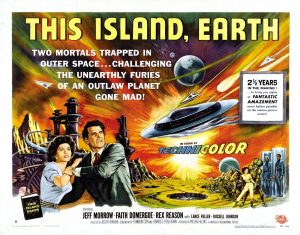 The basic story: Some scientists are being gathered by an unknown agency to work on leading-edge technology. It turns out that the agency is really peopled by extraterrestrials whose motives, in the beginning of the film, are unclear. Before the end of the film, the ET civilization behind all this activity is doing what it’s doing because it wants to migrate to the Earth, and for no nobler reason than that they’re losing an interstellar war! Some of the scientists figure out that they’re being spied upon, and a couple try for an escape from the facility where they’re staying, but get caught en route and are whisked to the distant planet Metaluna, apparently just to hear from the ruler’s lips that they’re planning to evacuate their world in favor of ours.

In the middle of all this, a major attack by their opponents enables the two scientists to get away, aided by a friendly Metalunan, who gets them to the ship, returns them to earth, and then conveniently dies, crashing the ship so that all the surviving earthlings have is an unbelievable story.

Details, of sorts: Early in the film, scientists are given parts and an assembly manual for an Interoceter, which, following the manual’s instructions, they assemble. Turns out this is supposed to be an “intelligence test,” to see whether the scientists were worthy of being recruited to the mysterious organization that proves to be the Metalunan front. In those days when do-it-yourself Heathkits were popular, the only tests they could pass doing what they did would be whether they could read and follow instructions.

En route to Metaluna, the characters have to be treated because the atmospheric pressure difference between the worlds was supposed to be so different that they had to be molecularly adjusted to survive. However, treated and untreated characters roamed around together in a common environment. (On the way back, the girl was grabbed by a Mutant after she’d been treated and the Mutant hadn’t, and it exploded because it couldn’t cope with the reduced pressure. This is “selective physics,” like the momentum problems in Rocketship X-M.) The Special Effects weren’t that special. The guided meteors slamming Metaluna were pyrotechnic, and sparks from them dropped straight down, even though the meteors were coming in at an angle. The visuals were pretty good, though.

The film was obviously created by those who had little or no technical (scientific) knowledge. Science Fiction as a discipline does not contain scientific errors of the knowledge at the time it was written. Thus, Destination Moon, The Thing From Another World, and The Day the Earth Stood Still could be considered science fiction; this one can’t.