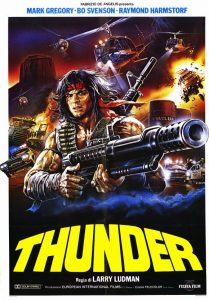 When Thunder (played by Mark Gregory of 1990:Bronx Warriors) returns home to see his girlfriend, he finds the local bank has financed the construction of a new building directly on top a sacred family Indian burial ground still owned by his tribe. An elder, who is the grandfather of his girlfriend, explained to him how the city roughed him up when he went and asked them to stop and honor a hundred year treaty signed that his people own the land.

Thunder, gets angry, and starts trouble with the construction crew that starts this wave of destruction that sets the pace for the rest of the film. The local police department doesn’t want the aggravation so they handcuff Thunder and drive him to the city limits warning him not to come back. Thunder obviously returns only to get slapped around and threatened by a group of officers that take the law into their own hands. He escapes the beating, not without turning the entire town upside down in a wild police chase. Hiding in the mountains, the police assemble a posse to go in after Thunder.

Sound familiar? I hope while you were reading this you caught on that this is an Italian rip off of the original First Blood. It’s been released under a few names. You can find it on Netflix as Drug “Traffikers” (I didn’t spell that wrong, that’s how it’s spelled!) which makes no sense because the film has absolutely nothing to do with drugs. The difference is this was filmed in the desert, as said in the film Page Arizona. Coincidentally, John Rambo was part Indian and from Yuma Arizona.

Now, Thunder is not a guy to mess with. The Elder stated that Thunder is the son of the son of Night Eagle. Not sure if that actually means anything, but it’s got to mean some serious business. There are tons of similarities to First Blood such as the deputy Barry Henson acting just like First Bloods Galt, and Sheriff Bill Cook (Played by Bo Svenson of Kill Bill, The Inglorious Bastards, and Delta Force) is manner exactly like Sheriff Teasle. Thunder jumps off a cliff to escape in a scene, minus the tree, and is pretty amazing with a bow and arrow. He destroys a police station and a bank, and though he doesn’t blow up a gas station, one does get blown to smithereens. He even tells a cop that was inches from death to let it go, in other words.

A great warning is said in the film that states, “Thunder hasn’t dug up his war hatchet yet.” Not that he ever does, because he steals a bulldozer armed with a bazooka and starts blowing everything in his way up. There is a scene where he is being hunted by two guys on horseback and he shoots the bazooka at them. Priceless. For Arizona residents, you do briefly get to see the Glen Canyon Dam (Not to be confused with The Hoover Dam), a few Arizona chains still in business in the background of the city, and a college football game talking about The Sun Devils Stadium which is minutes from my house.

Thunder is a lot of fun and perfect for any dude night. It has some corny voice-overs that will make you laugh, great explosions, and come on, it’s a rip off of one of the greatest action films ever made. Look out for the little kid at the end in war face paint when he says, “Thunder will never die.” It deserves the cheesiest voice-over of a kid ever to end a film award!