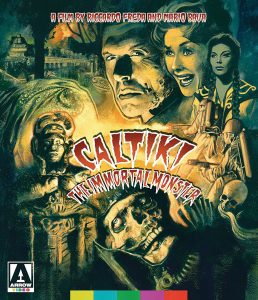 “Caltiki”, the story of a carnivorous micro-organism in the Mexican jungle grown to terrifying proportions by the radiation of a once-in-every-seventy-millenia comet, enjoys the same sort of on-the-surface “B” movie innocent schlockiness and underlying dark edginess mix which graced legendary Roger Corman’s monster and sci fi work in the late fifties. The monster is a product of nature, however, and probably would not have been a problem to modern civilization, but true to the 1950s paradigm of idiot scientists not knowing when to leave well enough alone, a team of doltish researchers actually recover a bit of the slithery beast to play around with. Of course, the scientists discover that the monster considers laboratory induced radiation just as good as the natural kind. The results, as one may imagine, are not good (but are plenty entertaining for us!)

A scene in which a deranged victim of the monster is devoured outright is delightfully disgusting (the monster SLOWLY overwhelms its victim–pulsating and digesting–and then recedes to reveal a denuded skull). The low budget effect equals even the high tech grislyness of Chuck Russel’s recent “The Blob”. Not at all bad. I saw it when I was eight and it gave me nightmares for years!

0 106
The Adventures of Barry McKenzie