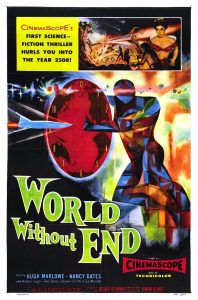 This is the perhaps the best script from a writer’s point of view of any of the 1950s low-budget “B” sci-fi films. Galactic fiction being beyond the capacities of Hollywood writers’ imaginations, the best they could do is “futuristics”, stories of apocalyptic, invaded, poisoned or plagued Earth. Larger budgets made possible color features such as “War of the Worlds”; and “When Worlds Collide”; others with less backing made “Kronos”, “Earth Versus the Flying Saucers” and this gem of the genre. Here four astronauts who return from a mission to Mars are caught in the usual ‘time warp’; and so they return to find a devastated Earth of the future–atomic war being the destructive force. The astronauts are led by dependable leading man Hugh Marlowe; the others are young Rod Taylor, Christopher Dark and announcer–voiced nice guy Nelson Leigh. They become involved with The Council, led by Everett Glass and run afoul of fine actor Booth Colman as a man jealous of their potency as political leaders and their genetic potential to please the local female population. Others in the cast include fine character actors Paul Brinegar and Herb Vigran. Borrowing a page from Edgar Rice Burroughs’ Opar tales, author and director of the film, Edward Bernds, has introduced beast men, impotent males and gorgeous women who seem seem almost to belong to a different race. The three lovelies are played by capable leading lady Nancy Gates, Lisa Montell and Shawn Smith. What sets this film apart is fine music by Leigh Harline, intelligent sets, enjoyably-revealing costumes for the ladies and its dialogue and interestingly-developed characters. The four astronauts learn about the new society of wrecked Earth, its problems and hopes, as we do, adding to the impact of the story. Dark has a good part as he mourns his lost family; the older Leigh enjoys his status as a sought-after-male and scientist, Taylor is stalwart and promising but battles his Australian accent. Marlowe makes everyone else look better as usual by his intelligence and ability to handle adventure-level dialogue. The action climax sets the four up to be the leaders of a new and perhaps better world, with the beast men at bay and affairs of the heart settled admirably– and Dark in charge of the children who are the hope of a rebuilt Earth… I cannot recommend this exercise in clever low-budget sci-fi film-making too highly. This is an exciting and interesting narrative.