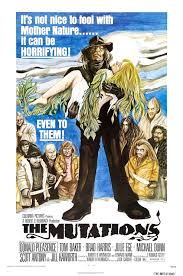 This is a totally bizarre British horror film which deserves cult status of the highest order – I can’t believe that this didn’t have problems with the censor, it is a disturbing, nasty piece of work and should undoubtedly have cult status.

‘The Mutations’ has Donald Pleasence as a Frankenstein-inspired scientist, Prof Nolter, who in-between his lecturing is trying to fuse humans with plantlife, to create a creature which has the strengths of both species. The nature of the film is introduced early, with a travelling funfair complete with freaks ( played by real-life freaks as in Tod Brownings early classic ), and a hideously ugly normal-sized man, who moonlights as Prof Nolter’s assistant.

The film has so many points of interest its difficult to know where to start – the similarities to ‘Freaks’ are acknowledged with a feast scene which includes the line “He’s one of us – we accept you”. The freaks are also shown to have more humanity than the other characters, although they do turn on their tormenter in the end, in a scene similar to the climactic chase in ‘Freaks’.

There are also ideas and scenes close to the French classic ‘Eyes without a Face’; Pleasance portrays a character similar to Pierre Brasseur’s mad doctor, both living in a secluded mansion complete with pack of mad dogs.

As if all this were not enough, we are also treated to Julie Ege as the screaming heroine, showing of her acting limitations and bodily curves very nicely – special applause for the nude bath scene.

‘The Mutations’ is a real shocker, which viewed today has a strong impact – far more so than more famous ‘shocking’ films, like ‘The Devils’ and the earlier ‘Peeping Tom’, both of which viewed now seem relatively tame.

While not raising the film to any artistic height – it is a cheap ‘B’ Movie in all production areas – the film should really be seen by all film fans, and given its deserved status as a heavyweight of the gutter-horror genre.